One vehicle is stolen every 15 minutes in the capital, according to the Delhi Police. In one day alone, as many as 109 vehicles go missing from Delhi’s streets.

NEW DELHI: One vehicle is stolen every 15 minutes in the capital, according to the Delhi Police. In one day alone, as many as 109 vehicles go missing from Delhi’s streets.

Ever wondered where these stolen two-wheelers and four-wheelers end up? Take a drive to the hinterlands of Uttar Pradesh. And you will see machines known as ‘jugaad’ (low-cost assembled vehicles) and generators that help electrify pockets facing acute power shortage. This is where your vehicles are going.

And now, with the high number of vehicles stolen from Delhi, more and more machines can be easily made available to people wanting to turn the machines into generators or jugaads. This in turn has drastically brought down the price of such machines. Areas such as Meerut, Muzaffarnagar and Sambhal, which are famous for manufacturing such machines, are selling these for 40 per cent less than the original price. After being stolen, the vehicles are quickly dismantled on the Meerut Bypass. In January last year, a Delhi Police team raided a warehouse in Kaveri Colony, near Meerut Bypass and found parts of cars. Four persons were arrested.

In July this year, the Delhi Police busted a gang that used to steal vehicles as per demand and sell those to scrap dealers in Meerut. “During interrogation, it was revealed that they sold stolen vehicles to scrap dealers in Meerut and to their counterparts in Nepal,” DCP (South) Ishwar Singh said.
With that the Delhi Police claimed to have solved eight cases and recovered five two-wheelers and two four-wheelers. But the trade goes on unabated.

A dealer of local made generators and ‘jugaad’ claimed that now heavy engines are in demand. “Engines of Bullet, or any other 200 cc motorcycles can generate electricity for a larger area than a generator made from 100 cc bike,” said the man on condition of anonymity. A local dealer said that now they manufacture generators and ‘jugaad’ on demand as the engines needed for it are easily available. “It takes a week to make one,” he added. 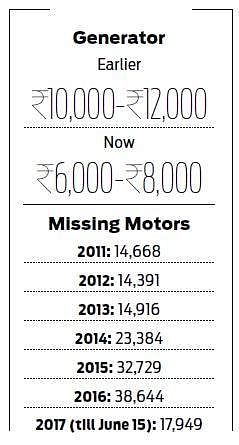