The Viral Fever’s team soon put out an official statement denying the claims as baseless and ludicrous, but it got more attention for the threatening tone of the note.

Popular YouTube channel The Viral Fever’s founder Arunabh Kumar has been accused of sexual harassment by a former employee in a blog, leading to a series of events including other female associates also claiming to have been sexually assaulted, and TVF issuing a response that was flayed for being threatening in its language.

Arunabh Kumar, an IIT graduate, founded The Viral Fever in 2011

The TVF sexual harassment saga began when an author, who goes by the name Indian Fowler, blogged on Medium about the sexual harassment she faced at the hands of Arunabh Kumar while working with The Viral Fever (now also an app). Titled 'The Indian Uber- That is TVF', referring to similar sexual assault allegations brought against an Uber employee in the US by a former techie of the cab aggregator, Indian Fowler detailed the sexual harassment she faced while working with the startup, and specifically accused founder Arunabh Kumar of sexually assaulting her.

As soon as the blog post began trending across several platforms, Aayushi Agarwal, a former TVF employee, and Reema Sengupta of an external agency, who had directed a web series for The Viral Fever, came out in support of the writer, Indian Fowler, and described their own sexual experiences of sexual assault at Arunabh Kumar’s hands.

The Viral Fever’s team soon put out an official statement denying the claims as baseless and ludicrous, but it got more attention for the threatening tone of the note.

The Indian Fowler narrates on her blog how she had been inspired by Arunabh Kumar and his idea of the startup. She writes, "He came from the same city. Muzaffarpur. So we moved from 'main' to 'hum'. The typical way Biharis speak. ‘humko bambai me bahut akelapan mahsoos hota hai (I feel very lonely in Mumbai).’”

The employee also describes ‘leading’ conversations that Arunabh initiated on several occasions —talking about Chaturbhuj Sthan, the red light district of Muzaffarpur, indulging in 'role play'  and so on. The woman alleges that even a threat of a police complaint didn't stop him from making such statements. “Police to meri pocket me hai. (The cops are on my payroll),” she quotes him as responding.
The writer also says she mentioned this to her other bosses but was not taken seriously. On one such occasion when she says she complained to a colleague, Kasturia, he had allegedly brushed it off saying “Duniya hai. Hota hai (It happens)”.

Within a few hours of the blog going up on Medium.com, two more incidents of ex-TVF employees being harrassed had surfaced.

The Viral Fever, trying to clear the air, released an official statement that said, "We will leave no stone unturned to find the author of the article and bring them to severe justice for making such false allegations." They consistently denied the occurrence of such incidents and questioned the authenticity of the anonymous blog post. 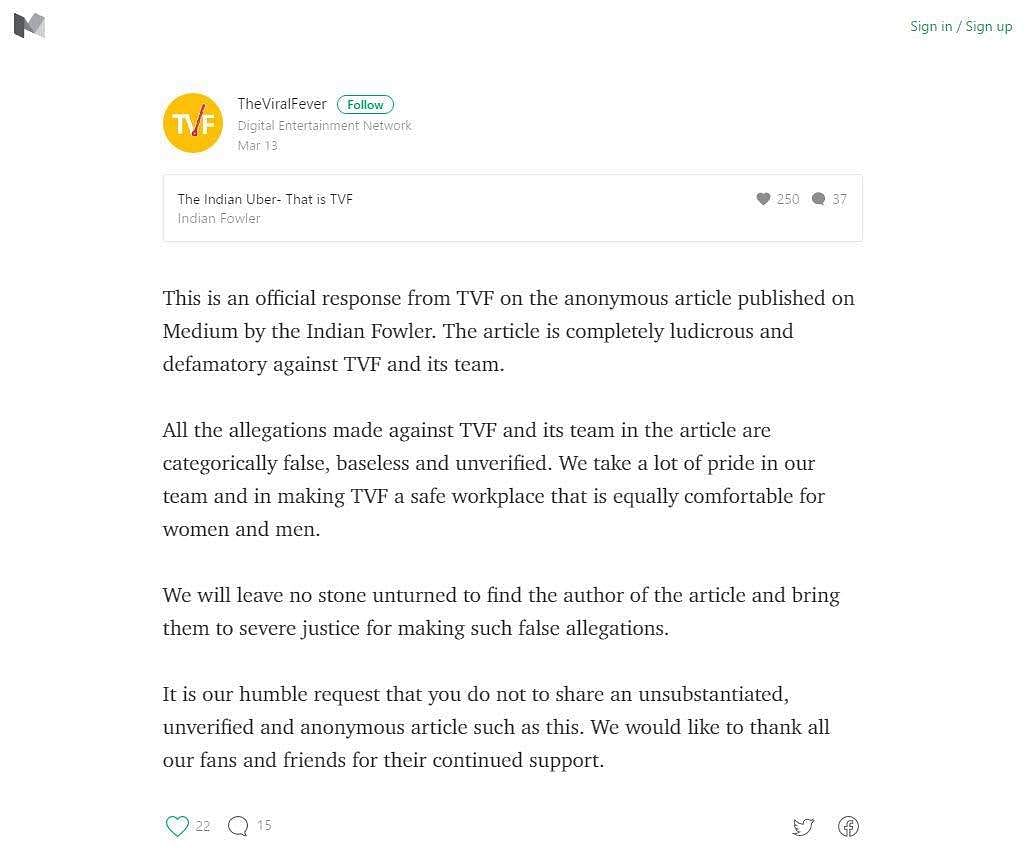 Twitterati immediately picked up on the issue and the #BoycottTVF began trending almost immediately after TVF's official response.

Most importantly, TVF's first response (if it is the official one) sounds more like a threat than a genuine attempt to find out the truth.

Investigate, and prove the accusers wrong if these are mere false accusations #TVF

From a team that has delivered brilliant content, they needed a better media statement. #TVF

What's worse than the sexual harassment allegations against the TVF founder? Their response to it. 'Bring the author to justice' #BoycottTVF

I pledge not to watch TVF shows any more. #BoycottTVF is the way to teach the molester Arunabh Kumar a lesson

On the other side, TVF employees including actors, producers and directors have also been tweeting in support of Arunabh Kumar and claiming that the sexual harassment allegations are false.

I categorically say that i know no such woman and i haven't made any remark like that.

Nidhi Bisht, one of the co-founders, vociferously denied the allegations and called them baseless and fictitious.

5 yrs at TVF & no memory of who this Female employee is. It's a baseless fictitious allegation. Haters pls don't stoop down to this level :(

Now we are on Telegram too. Follow us for updates
TAGS
Arunabh Kumar The Viral Fever sexual assault allegation