Manoj Sinha the chosen one? BJP may take UP call today

Gets a pat on the back from boss Suresh Prabhu, but minister of state says he is not in the race; eight-time MLA Suresh Khanna could be the dark horse.

NEW DELHI/LUCKNOW:On the eve of the BJP legislature party meeting in Lucknow to elect the new Chief Minister of Uttar Pradesh, all attention in Parliament was focussed on the rather less-known Manoj Sinha. 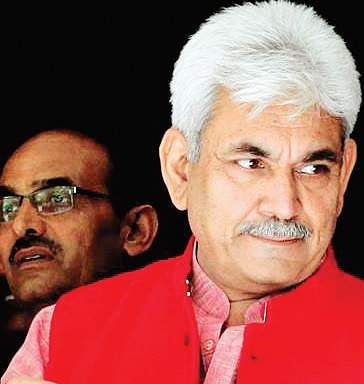 As the hot tip for the hot seat, the minister of state for railways was mobbed by MPs during the brief time he spent in Parliament, eager to shake his hand and wish him “all the best.”

Suresh Prabhu, Sinha’s boss in the Railway Ministry, beamed as he patted him on the shoulder. But Sinha himself fought shy, saying he was not in the race because “desires are treacherous”. Awkward amid the attention, the 57-year-old minister tried to make a getaway in his car to his constituency Ghazipur in Uttar Pradesh. All the same, one Uttar Pradesh MLA, stalking him in the forecourt of Parliament, managed to touch his feet.

Amid these colour smoke signals, the names of some of the other contenders got masked, notably that of Union home minister and Uttar Pradesh leviathan Rajnath Singh and the Uttar Pradesh BJP chief K P Maurya.

The air of certainty was a bit curious for BJP MPs have been saying that only the “Super Boss” knows who the next Chief Minister of Uttar Pradesh would be on the morrow. Some of the certainty could be due to the deductive exclusion of Rajnath Singh and K P Maurya, and some educated guessing about Manoj Sinha’s supposed proximity to the Prime Minister.

Rajnath was being discounted by pundits because he is a Thakur and the party had already chosen one Thakur, Trivendra Singh Rawat, for the hot seat in Uttarakhand. Also, Rajnath is said to prefer staying in New Delhi so that his son could be given a place in the Uttar Pradesh cabinet.

Part of the reason why the pointer has swung to Sinha is the pattern of chief ministerial choices Prime Minister Narendra Modi has made in the past. Devendra Fadnavis in Maharashtra, Manohar Lal Khattar in Haryana and Raghubar Das in Jharkhand have all been choices made on the basis of administrative acumen, leadership qualities rather than mere caste and faction considerations.

So while MBC leader K P Maurya was strongly tipped right after the flood of positive results on March 11, pundits say it was Manoj Sinha’s handling of the railways and telecommunications ministries that seemed to have swung it for him. As an IIT-BHU alumnus, Sinha also has the kind of technocratic mien that the Prime Minister is said to prefer rather than purveyors of ideology like Yogi Adityanath and Uma Bharti.