Government admits your Aadhaar data has been leaked

For the first time, Modi government has officially acknowledged that personal identity of individuals, including UID number, bank accounts and other sensitive information may have been leaked.

CHENNAI: If you have an Aadhaar Card and if your bank accounts and other sensitive information are linked to it, chances are that your data is no longer secure.

For the first time, the Modi government has officially acknowledged that personal identity of individuals, including Aadhaar number and other sensitive information, has been leaked to the public domain.

The government, in the recent past, had ignored all warnings and criticisms about the UID data being sensitive and has been aggressively pushing for its adoption across services and platforms. 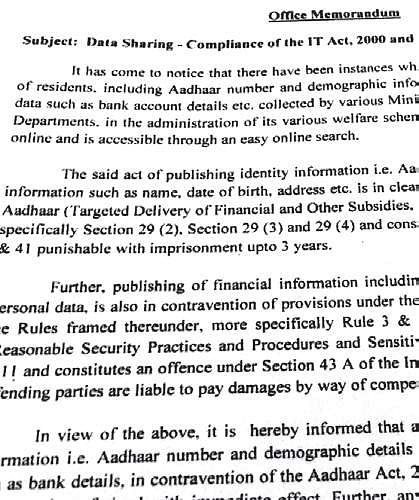 A letter written by the Ministry of Electronics and Information Technology, accessed by Express, confirms the data, which the government has been cautiously guarding, has been leaked online.

“There have been instances wherein personal identity or information of residents, including Aadhaar number and demographic information and other sensitive personal data such as bank account details etc. collected by various Ministries/Departments... has been reportedly published online and is accessible through an easy online search,” Archana Dureja, a scientist in the Ministry of Electronics and Information Technology, wrote on March 25.

The official went on to add that the leak of data was a serious and punishable offence.

“Publishing information like Aadhaar number along with name, date of birth, address etc. is a clear contravention of provisions of the Aadhaar Act, 2016 and is punishable with imprisonment of up to three years,” the letter said.

“The offending parties are liable to pay damages in the form of compensation to persons affected.” The official, through her letter, also directed ministries and states to discontinue any such content with immediate effect.

Ironically, the same Ministry of Electronics and IT issued a statement on March 5, assuring that personal data of individuals held by UIDAI is fully safe and secure. Issuing a clarification on ‘misinformation in some news items’ alleging breach of the UID data, misuse of biometrics, breach of privacy, and creation of parallel databases, UIDAI had said that it had gone through all the reports and emphasised that there was no leak of data.

Incidentally, questions regarding the preparedness of the government in handling such a data leak was raised in Parliament on Wednesday by former Finance Minister P Chidambaram. “How do you propose to protect the privacy of individuals after transactions are linked to Aadhaar?” he asked.

Giving a celebrity touch to concerns regarding invasion of privacy, just days ago, cricketer MS Dhoni’s wife Sakshi Dhoni wrote on social media how her husband’s Aadhaar details were made public. The government, on the back foot, promised action against the agency tasked by UIDAI to generate Dhoni’s Aadhaar number.

The government had termed it as an isolated case while announcing that the agency concerned was blacklisted for 10 years. The letter, however, makes it clear that the leak could have been widespread.

Adding to the concern is the government’s aggression in pushing for inclusion of the UID across platforms, from filing I-T returns to obtaining PAN cards, and Finance Minister Arun Jaitley’s assertion when asked if the scheme was being forced on people, saying “Yes, we are.”

Now we are on Telegram too. Follow us for updates
TAGS
Aadhaar card bank accounts Leak Link Personal Data