The dominant view is that the central bank is likely to leave repo rate unchanged at a seven-year-low of 6 per cent.

MUMBAI: As the RBI’s Monetary Policy Committee (MPC)  began its two-day diagnosis of the economy here on Tuesday, India Inc and government are hoping against hope for a rate cut, citing the sagging economic growth. The dominant view, though, is that the central bank is likely to leave repo rate unchanged at a seven-year-low of 6 per cent.

Expectations are high as private investment is constrained by the unwillingness or inability of lenders and borrowers. Demonetisation and GST punctured growth to a 3-year-low. Amid the gloom, rate cuts are seen as the fairy dust that’s supposed to make all the bad stuff disappear. 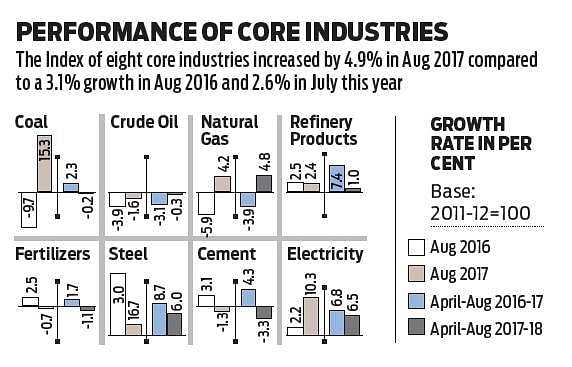 Trade body CII pitched for an ‘out-of-the-box’ 100 bps cut in repo rate to spur investments. Others, however, have moderate expectations, pencilling in a 50 bps cut by March, 2018 before the central bank freezes the rate-easing cycle. Of this, a 25 bps reduction is expected on Thursday and such a move could boost investor sentiment. But whether the RBI Governor, Dr Urjit Patel, ditches his hawkish stance in favour of rate reduction remains to be seen.

For Patel and team, the primary job is inflation targeting and anything above 4 per cent forces RBI into writing a humbling explanation to the government for its failure to keep prices in check.
For the government, reviving growth, which fell to a 3-year low of 5.7 per cent during the June quarter, is crucial and unless investments pick up, growth prospects remain cloudy. For  the third-quarter, GDP is likely to print at 6.6 per cent, Y-o-Y, down from a previous forecast of 6.9 per cent.

While growth slowed in the April-June quarter over the previous year, inflation in August accelerated to its fastest since March driven by rising food prices. Core prices, excluding food and fuel prices, also rose. On the other hand, manufacturing sector grew in September on the back of an increase in new orders and output, but fresh export orders fell.

Industry demands rate cut
“I  strongly recommend that there should be a 100 bps rate cut. We need out  of the box thinking. We all talk that the private sector investments  should come in and we want the economy to pick up,” said Chandrajit Banerjee, Director General, CII.