Study by pollution control board finds that no spot in commercial or residential areas meet noise standards; calls for expediting noise abatement initiatives

NEW DELHI: High levels of air pollution in metro cities remain a cause of serious concern but what often goes unnoticed is the equallyalarming levels of noise pollution in India’s metro cities. A study by the Central Pollution Control Board (CPCB) found that noise levels were higher in over 85 per cent of the noise monitoring stations across seven cities.

India has a diversified National Ambient Noise Monitoring Network (NANMN) under which there are 70 monitoring stations in seven cities (10 each) — Chennai, Bengaluru, Kolkata, Hyderabad, Lucknow, Delhi and Mumbai — that carries out continuous noise monitoring throughout the year. Of these 70 monitoring stations, 25 locations are in commercial zones, 12 in industrial, 16 in residential and 17 in silent zones.The study, published in the latest edition of scientific journal Current Science, said, “It was observed that no site lying in commercial or residential or in silent zones met the ambient noise standards.” Silence zone consists of hospital and schools areas. 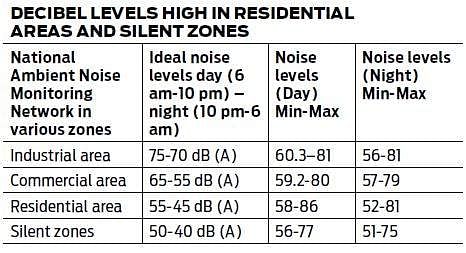 It also said that noise database presented for 70 locations under consideration will help the town administrators and planners for effective traffic management and noise control at that site.
It stressed that, “proper planning and execution of noise abatement programme shall be indispensable for reducing noise pollution in Indian cities and development of ‘smart cities’ project executed by the government of India”.

The analysis also revealed that some sites immediately required a comprehensive noise abatement package for bringing the noise levels below the ambient standards.
It said, various control measures like “appropriate land use planning, installation of noise barriers for hospitals, schools, colleges, old age homes, enforcement of maximum speed limit for heavy vehicles in residential areas, development of poro-elastic road surfaces for traffic noisecontrol, establishment of no honking zones especially for residential and silence zones and traffic management” can be instrumental in ambient noise control.

According to experts, noise pollution can have serious effects on health and psychological well-being of people. For instance, noise over 90 decibels can cause nervous breakdown and lead to loss of hearing.
In residential areas, the safe noise level limit is 55 decibels during daytime (6am-10pm) and 45 during the night (10pm-6am); for commercial areas 65 decibels and 55 decibels; for industrial areas 75 decibels and 70 decibels and for silence zones 50 decibels and 40 decibels respectively.
The study also recommended that studies on noise annoyance and effect of noise on human health should be conducted in parallel exclusively for the Indian scenario so as to quantify the environmental noise impact assessment in Indian cities.

Eleven people have been booked in Chandigarh for allegedly bursting crackers in violation of a court directive, the police said on Thursday.  Last week, the Punjab and Haryana High Court had directed that crackers could be burnt only between 6.30 PM to 9.30 PM on Diwali day in Punjab, Haryana and Chandigarh. No arrests have been made.