Concerned over the long time taken in deciding criminal appeals, especially in cases of non-heinous crimes, the Supreme Court is contemplating fixing a time-frame for wrapping up such cases.

NEW DELHI: Concerned over the long time taken in deciding criminal appeals, especially in cases of non-heinous crimes, the Supreme Court is contemplating fixing a time-frame for wrapping up such cases.

A bench of Justices J Chelameswar and Sanjay K Kaul Wednesday said steps were required to ascertain criminal cases did not remain pending for decades, which forces the accused to remain in jail for longer than the charges warrant. “Some drastic measures are required… there will be practical difficulties we understand but drastic steps will have to be taken,” the SC said.

A report submitted recently in the apex court had revealed that as many as 14 criminal appeals were pending for more than four decades. The oldest appeal is pending in the Allahabad High Court for 46 years. 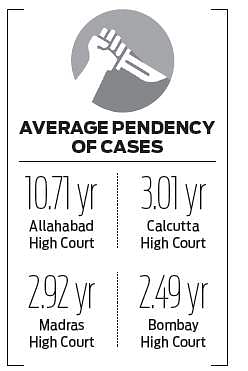 According to the Economic Survey 2017-18, the average pendency of civil and criminal cases is as high as 10.71 years in the Allahabad High Court. The Calcutta High Court’s average pendency stands at 3.01 years, the survey said, while it is 2.92 years and 2.49 years for the Madras High Court and the Bombay High Court, respectively. A huge majority of cases have been pending for 10-15 years.

Justice Kaul said there could be a system to decide non- heinous cases, in which the punishment is less than seven- year jail, within a time- frame.

“There can be arguments on both sides about why cases are delayed. There could be something done for quick disposal of small cases, especially those that don’t involve heinous offences,” suggested the bench, adding the disposal could be expedited if judges and lawyers collectively and consciously took a call to speed up the hearings while ensuring fairness of the proceedings.

The bench made the observations while ordering the release of  two accused on bail who had been in jail for 16 years, awaiting their appeals to be decided by the Allahabad High Court.

The observation came in context of the petitions the SC had proceeded to examine long delays in hearing criminal appeals, and then sought a report from HC’s Registrar General.