The AAP has denied the allegations and Union Home Minister Rajnath Singh has sought a report on the alleged attack from Lieutenant Governor Anil Baijal.

Prakash was reportedly called for a meeting around midnight on Monday where Kejriwal along with his deputy Manish Sisodia and 10 to 12 MLAs was present. The meeting was on "some advertisements by the Delhi government which were in violation of the Supreme Court's guidelines".

The chief minister's office (CMO), however, has dismissed the accusation of Chief Secretary Anshu Prakash being assaulted last night as "bizarre and baseless" and also said the meet was on "faulty implementation" of Aadhaar that "deprived about 2.5 lakh families of ration".

HERE ARE ALL THE UPDATES:

Anshu Prakash alleged that as the meeting started, one of AAP MLAs slammed the door shut, and he was made to sit between MLA Amanatullah Khan and another MLA on a three-seater sofa. "CM directed me to answer the MLAs and explain the reasons for the delay in the release of the TV campaign. I explained to them that officers were bound by guidelines laid down by the Supreme Court," he said in the complaint. [READ FULL REPORT HERE]

The Delhi Police has filed an FIR on a complaint from Anshu Prakash under various sections, including 120B (criminal conspiracy), 186 (obstructing a public servant from performing the duty), 323 (voluntarily causing hurt), 342, 504, 506(2) & 120b & 34. and 353 (assault on public servant) against AAP’s Okhla MLA Amanatullah Khan and others. (ANI) 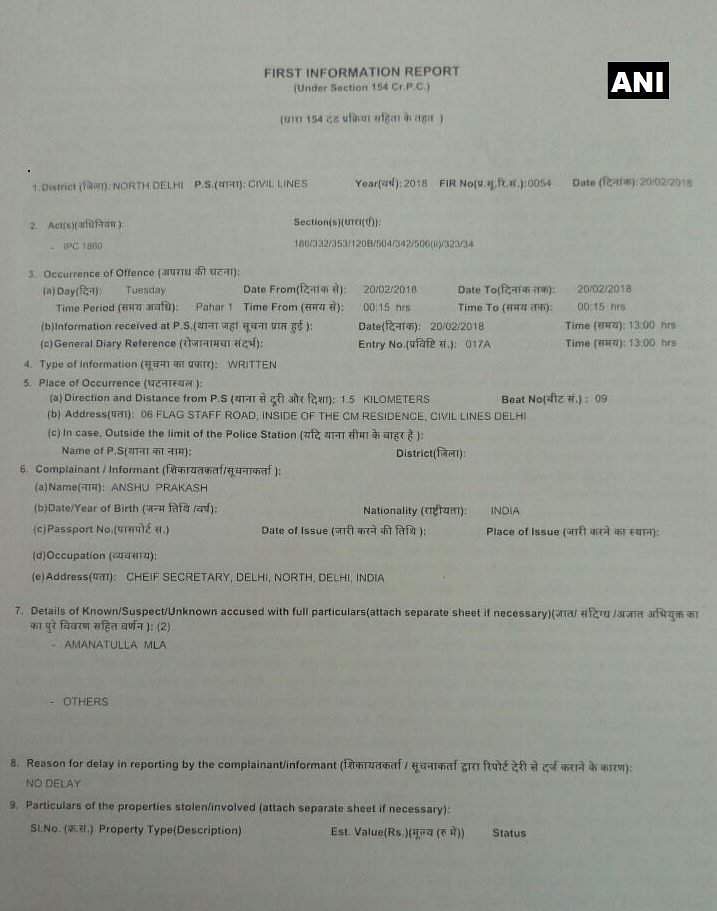 11 AM: News is planted that CS was manhandled; 12 noon: Office bearers of IAS Officers Assoc & allied services start giving statements against AAP Govt; 1 PM: Imran Hussain & I are attacked at Secretariat; 4 PM: HM gives a political statement. Isn't this all orchestrated by BJP?

AAP leader asks how mob was allowed inside Secretariat

The fundamental question is how can police allow such huge mob to gather at high security zone like Delhi secretariat and then allow them to assault 1 member of the Govt and 15 minutes later another member of the cabinet? -@AashishKhetan pic.twitter.com/IRNLD46T2z

Delhi Environment Minister Imran Hussain was mobbed by over a hundred officials and staff. AAP leader Aashish Khetan tweeted that he was attacked too.

Officials and staff of the Delhi government raised slogans and prevented Hussain from taking the elevator to his 6th floor office at the secretariat this afternoon. The minister later filed a complaint with the IP Estate Police Station alleging that he was assaulted.

The BJP demanded Arvind Kejriwal's resignation while the Congress termed the incident an "administrative and constitutional crisis", and sought an apology from the chief minister. [READ FULL REPORT]

Delhi government spokesperson Nagendar Sharma denied the allegation saying the Chief Secretary was making false accusations at the behest of the BJP.

Sharma said during a meeting at Kejriwal's residence on the "faulty implementation" of Aadhaar that "deprived about 2.5 lakh families of ration", the Chief Secretary refused to answer questions saying he was not answerable to MLAs or the Chief Minister but only to the Lt. Governor.

"He even used bad language against some MLAs and left without answering any questions.

"If the Chief Secretary can make such wild allegations, one can imagine the kind of obstacles that are being created in AAP government's work by BJP through the officers."

AAP MLA @AjayDutt48 has written to @CPDelhi to lodge FIR against the Chief Secretary. Delhi chief secretary used "casteist remarks" against him in a meeting at CM @ArvindKejriwal residence. pic.twitter.com/vchb5wdkWt

BJP MLA Vijender Gupta, who is also the Leader of Opposition in the Delhi Assembly, alleged that Kejriwal "in his dictatorial style" called the Chief Secretary at midnight on Monday and "berated" him in front of his MLAs.

Gupta said Kejriwal was "drunk on power" and his concern was only about why more funds were not dispersed for advertisements. "Such is the state of affairs under AAP."

"In total, nine AAP MLAs were present at the CM's residence when the Chief Secretary was assaulted. They represent people of Delhi but are nothing short of urban naxalites. How utterly disgusting behaviour," he said.

"I am deeply pained by the happenings involving the Chief Secretary of the Delhi Government. The civil servants should be allowed to work with dignity and without fear," Home minister Rajnath Singh tweeted. He sought a report from Delhi L-G Anil Baijal.

The MHA has sought a report on the incident from the Lieutenant Governor of Delhi. Justice will be done. A delegation of IAS DANICS & Subordinate Services of Delhi Government met me today and apprised me of the prevailing situation.

DGEWA President D.N. Singh said the association met the Lt. Governor regarding the issue. He said members of the group would go to offices but won't work till action is taken against those who assaulted the bureaucrat.

IAS Association Secretary, Manisha Saxena, complained to Lt. Governor Anil Baijal, claiming that the attack on Monday night was a "planned criminal conspiracy" against the top bureaucrat. "For the past couple of years, officers have been insulted and humiliated in public. The attack on the Chief Secretary is an attempt to intimidate the bureaucracy to toe the line of the powers that be."

She also said the officers would work on Tuesday with a black band as a mark of protest and that the association has also filed a police complaint.

(With inputs from ANI, IANS and PTI)