A copy of the RTI (Amendment) Bill, 2018 circulated among members of Parliament on Tuesday drew widespread criticism from the opposition and activists alike.

NEW DELHI:You have heard rumours about the Centre planning to tweak the Right To Information Bill to dilute its provisions. Here’s the real thing: the proposed amendments allow the Central government to decide the tenure and salaries of Central and state information commissioners, which are currently statutorily protected.

A copy of the RTI (Amendment) Bill, 2018 circulated among members of Parliament on Tuesday drew widespread criticism from the opposition and activists alike.

The new bill wants it all amended. “The mandates of the Election Commission of Indian and Central and State Information Commissions are different. Hence, their status and service conditions need to be rationalised accordingly,” it reasons.

The proposed amendment says that the words “for a term of five years from the date on which he enters upon his office” in the RTI Act shall be substituted with “for such term as may be prescribed by the Central government”. 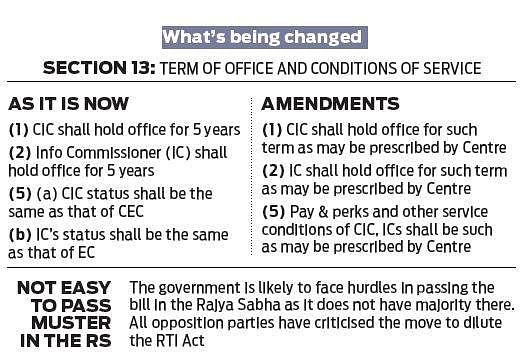 Stay up to date on all the latest Nation news with The New Indian Express App. Download now
TAGS
RTI amendment bill