NEW DELHI:Congress members in the Lok Sabha walked out in protest after Union Home Minister Rajnath Singh termed lynchings as “unfortunate” but sought to put the onus on state governments saying law and order was their responsibility. 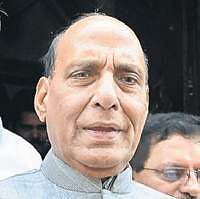 Singh said the Centre, on its part, had directed social media platforms to regulate norms to curb the spread of fake news. “We had issued an advisory on this recently, and one in 2016 also. Social media being used to spread fake news and rumours is also a reason. We have asked social sites for regulation,” he said.“I condemn it. Lynching happens on the basis of rumours and fake news. But it is duty of the state governments to take strict action against such incidents. It’s a state subject,” the minister asserted .He further said that the government had spoken to chief ministers of states where mob lynching cases were reported. He mentioned that lynchings had taken place earlier also.

This evoked an angry response from the Opposition benches. Congress leader Mallikarjun Kharge termed Singh’s statement as unsatisfactory before his party MPs staged a walkout.Before the home minister spoke, Congress members had raised slogans against Civil Aviation Minister Jayant Sinha for garlanding men convicted of lynching in Jharkhand recently. “Why was one of the members of the Union council of ministers was found garlanding the mob lynching accused?” asked party lawmaker KC Venugopal.

Outside the House, Congress MP Shashi Tharoor said the home minister’s statement was like passing the buck. “This is not a game of ping-pong that states and Centre keep shifting responsibilities,” he said.