The road transport and highways ministry has identified five industrial corridors to be converted into greenfield routes. 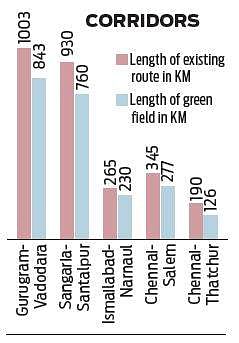 “Based on traffic studies and to enable efficient freight movement from industrial centres to the consumption centres as well as to the ports, the new green field routes were identified,” a ministry official said.While the length of the existing Gurugram-Vadodara route is 1,003 km, the green field corridor will be 843 km, bringing down the distance by 160 km. This green field corridor will  run via Sohna, Kota and Godhra.

In case of the Sangaria-Sanchore-Santalpur, the existing route length is 930 km. The green field corridor will reduce its length by 170 km. It will run via Bikaner.In case of the Ismailabad-Charkhi Dadri-Narnaul stretch, the green corridor will  reduce 35 km of the existing 265 km. A total of 68 km will be cut off on the 345-km Chennai-Salem stretch after the construction of the green field corridor. In case of the Chittoor-Thatchur stretch, the distance will be reduced by 64 km. “We are aiming to complete the construction of green field corridors at the earliest. Though no target has been fixed for their completion, the process has started,” a ministry official said.

Professor Seva Ram, Director of the School of Planning and Architecture (SPA), had a word of caution about the proposal. “At first glance, the proposal looks good but to execute it is the real task. These corridors are some of the busiest routes from where goods are transported. It is going to be really difficult to stop the traffic on these routes for the construction of the green corridors,” he said, adding that commuting would be easy and distribution very effective if the project is realised.

Stay up to date on all the latest Nation news with The New Indian Express App. Download now
TAGS
greenfield Chennai Salem Highway