Telangana topped the list with 33 proposals being sanctioned in the state, followed by AP where 30 couples got the incentives. Tamil Nadu and Maharashtra followed with 15 couples each.

NEW DELHI: Lack of awareness is leading to poor implementation of the Dr Ambedkar scheme for social integration through inter-caste marriages as just 136 couples from across India availed of it in 2017-18.

The Dr Ambedkar Foundation, an autonomous body, received 582 proposals, of which 136 proposals were sanctioned, said a senior official in the Ministry of Social Justice and Empowerment.“Other recommendations are under consideration,” he said.

Launched in 2013, the scheme aims to appreciate a “socially bold step” and incentivise couples. Under the scheme, 500 couples can apply annually. Each couple gets Rs 2.5 lakh, of which Rs 1.5 lakh is paid upfront. The balance amount is kept as a fixed deposit and released to the couple after three years.  Seven states including Assam, Chhattisgarh, Gujarat, Odisha, Punjab, Sikkim and Uttarakhand, had no beneficiaries with no proposals being sanctioned. 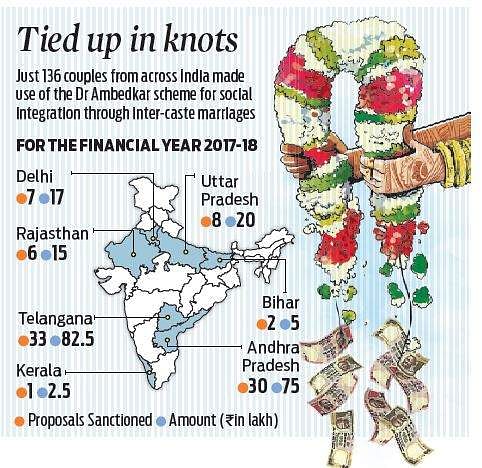 Telangana topped the list with 33 proposals being sanctioned in the state, followed by AP where 30 couples got the incentives. Tamil Nadu and Maharashtra followed with 15 couples each.  The response was lukewarm in Bihar, West Bengal, Karnataka, Kerala, HP, Rajasthan and Haryana.

“Factors that have led to the failure to popularise the scheme include the fact that the marriage has to be registered under the Hindu Marriage Act, 1955 and that the proposal needs to be submitted within a year of the marriage,” said the official.

The number of couples who can avail the scheme in a state depends on its Scheduled Caste population as per the 2011 census.  Between 2014 and 2017, only 124 proposals were sanctioned for the scheme.

Stay up to date on all the latest Nation news with The New Indian Express App. Download now
TAGS
inter caste marriage