Pradhan Mantri Awas Yojana: Only 4 per cent of homes complete in 9 states in PM’s housing scheme

Haryana and Uttar Pradesh fail to finish even a single house; best performers Odisha and Madhya Pradesh tally 9.08 per cent and 9.7 per cent, respectively

NEW DELHI: A mere 4.05 per cent of the over 20 lakh houses sanctioned for nine states under the Pradhan Mantri Awas Yojana-Grameen (PMAY-G) in 2018 have been completed so far, according to the data of the Ministry of Rural Development.

Other states also did not log impressive performance. Madhya Pradesh and Odisha — the two best performers — managed 9.7 per cent and 9.08 per cent, respectively. 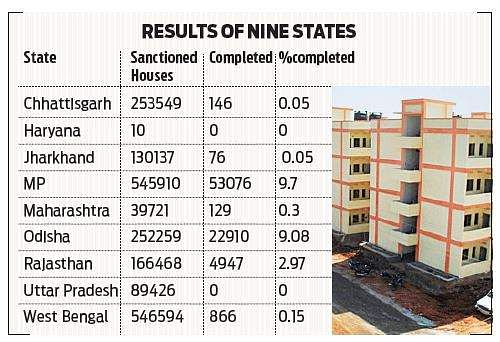 Officials in the ministry say work is being done at a snail’s pace due to various reasons. “One of the main reasons for the project lagging in these states is the non-cooperation and lackadaisical attitude of the state governments,” a ministry official said, adding that the ministry will review the status shortly and take corrective measures.

Some of the other reasons cited were the non-availability of infrastructure and raw material.     “We have done our bit to provide funds to the states but in many places, there is a lack of construction infrastructure. In some other places, it is very tedious for raw materials to be taken. Some of our other schemes like the Sadak Yojana are enabling us solve the problem but surely the pace of the execution is not up to the mark,” the official said, adding that it was the duty of states to ensure that the parameters for successful implementation of the projects were fulfilled.

Rural experts felt local factors were a major reason for the poor show. “There are a number of local factors which need to taken into account before assessing the progress of a scheme of such scale,” said Prof. HK Solanki of the National Institute of Rural Development, Hyderabad.

“For instance, elections are due in Chhattisgarh, Rajasthan and Madhya Pradesh. In the next assessment, we will see the numbers soar. This is a tactic all parties use to show development ahead of polls.”The housing scheme, previously known as Indira Awaas Yojana, is a social welfare programme that aims to provide housing for the rural poor.

Now we are on Telegram too. Follow us for updates
TAGS
Pradhan Mantri Awas Yojana PMAY-G