With the state polls just five months away, the Shivraj Singh Chouhan-led BJP government is already on its populist agenda to buck the 15-year anti-incumbency for winning a record fourth term.

BHOPAL:  With the state polls just five months away, the Shivraj Singh Chouhan-led BJP government is already on its populist agenda to buck the 15-year anti-incumbency for winning a record fourth term in Madhya Pradesh. The state Cabinet on Tuesday cleared the decks for two major initiatives under the ambitious Mukhyamantri Jan Kalyan Yojana, which comprises a series of sops for welfare of the disorganized labourers and small farmers in the state. 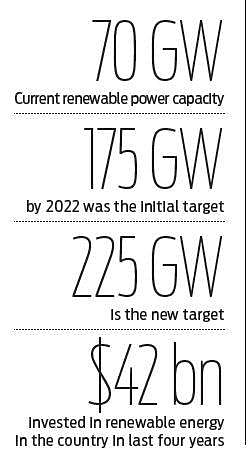 The Cabinet chaired by Chouhan gave nod to providing cheap electricity at a flat rate of `200 to poor segments of the population, particularly disorganized sector and farmers owning less than 2.5 acre land. The initiative which is likely to benefit over 80 lakh people will see beneficiaries getting electricity for meeting their necessities at monthly flat rate of `200 for first 100 units of power. The difference between the `200 monthly flat rate and actual bill will be funded by the government with a subsidy of `1,000-plus crore. Another allied sector decision which was cleared by the Cabinet was to waive off of all electricity dues of the poorer sections up to June 2018.

It will benefit around 77 lakh poor, but will also cost the government over `5,170 crore. Already facing anger of the farming community, the BJP government is wooing another key segment, the disorganised labour sector through the comprehensive CM’s Jan Kalyan Yojana. The Jan Kalyan Sambal Yojana includes covering the welfare of beneficiaries right from birth to death. The entire scheme will be inaugurated on June 13.

It offers sops in the form of supporting the families right from the birth of a child to the death of the head of family and,thereafter, even helping the family meet expenses pertaining to the last rites. The Yojana also has a provision for making every poor family have its own house/ flat under different housing for poor schemes. The Congress was quick to respond with a jibe. “The CM is ‘ghoshna veer’ (good at rhetoric) and its just another announcement which is not going to be fulfilled, just like thousands of other promises made by him,” said Congress state head Kamal Nath.

Now we are on Telegram too. Follow us for updates
TAGS
shivraj singh chouhan madhya pradesh sops