Kevin Pietersen (37), one of most flamboyant cricketers in recent times, has found a new friend in Indian bureaucracy, Aman Singh (49), the principal secretary to the Chhattisgarh chief minister.

Kevin Pietersen (37), one of most flamboyant cricketers in recent times, has found a new friend in Indian bureaucracy, Aman Singh (49), the principal secretary to the Chhattisgarh chief minister. The South African-born cricketer was acquainted to a wide array of topics through dialogues with the unorthodox bureaucrat Singh, widely recognised as the architect of CM Raman Singh’s three consecutive terms. “You’re a great person and can’t wait to spend more time with you enjoying Chhattisgarh (sic)”, Pietersen tweeted showering praise on Aman Singh, who also loves to play and promote cricket. Hope Pietersen imbibes characteristics of bureaucracy too. 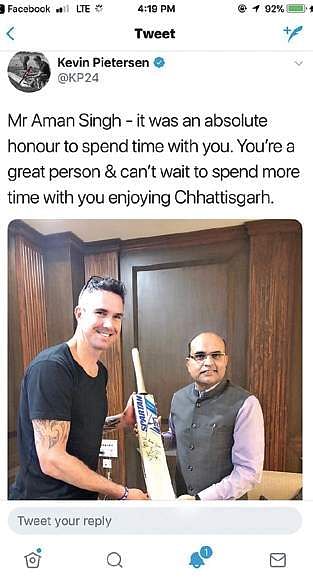 Chhattisgarh is preparing a blueprint to teach school students the art of Japanese paper theatre. The art form known as Kamishibai — that translates to paper-theater in English — is believed to have begun in Japan in the late 1920s and tells stories through pictures.

The idea to introduce Kamibashi in schools comes with a belief that it will enable children to take more interest in academic pursuits and help them grasp complex content easily. The decision comes after state school education minister Kedar Kashyap visited Japan. The Rajiv Gandhi Shiksha Mission has been given the responsibility to prepare the content, themes and materials.

Many people might be unaware about the fact that the Jungle Safari in hi-tech capital city Naya Raipur is an enchanting feature that combines various safaris and is the largest man made jungle safari in the Asian continent.  It is spread across an area of 203 hectares.

A huge gate at its entrance brings to the mind of every visitor, scenes from the Hollywood movie Jurassic Park. A beautiful garden decorates the park near its entrance. The forest is divided into seven zones, gold carts and a crocodile conservation point. Eco-friendly vehicles made available for visitors to tours the picturesque forest lively with the movement of wild animals and relish the beauty of nature.

Chief coach of IPL team Delhi Daredevils and former Australian cricket captain Ricky Ponting has apparently offended IPL lovers in Raipur by candidly rejecting an offer by Chhattisgarh State Cricket Association to play two IPL matches in Raipur-based International Cricket Stadium at Naya Raipur. The Daredevils in the past had made the Raipur Cricket Stadium their second home. The former World Cup-winning skipper was not in favour of two home grounds though the officials of GMR, the owner of the Delhi team, were keen to hold matches in Raipur this year.

Our correspondent in Chhattisgarh