Case of assaulted nurse left in a vegetative state sparked debate on euthanasia, a complex issue related to medical ethics and law

NEW DELHI/MUMBAI: The Supreme Court’s verdict on Friday legalising passive euthanasia owes much to the Aruna Shanbaug case, around which India debated euthanasia. By allowing euthanasia and spelling out strict guidelines on how it can be carried out, the Supreme Court has taken a step towards giving the exact interpretation of the ‘right to live with human dignity’ mentioned in Article 21 of the Indian Constitution.

In the Aruna Ramchandra Shanbaug case, the validity of passive euthanasia was upheld by the Supreme Court, but there is no elaborative procedure for doing the same as the court was under the influence of the Gian Kaur case of 1996, in which it was held that the right to live with dignity under Article 21 was inclusive of the right to die with dignity.

Aruna Shanbaug, 25, was a nurse in the King Edward Memorial Hospital in Mumbai when she was assaulted on November 27, 1973 by a sweeper. During the assault, she was tied with a dog chain around her neck, which cut off oxygen supply to her brain and left her in a permanently vegetative state.From that day Aruna could survive only on mashed food. She could not move her hands or legs and could not talk or even move facial muscles for more than 40 years. This led journalist-activist Pinky Virani, who published a book regarding her case, titled Aruna’s Story, to file a writ petition with the Supreme Court asking for the legalization of euthanasia so that Aruna’s suffering could be terminated by withdrawing medical support.
She contended that the patient had been in a vegetative state for the past many years and did not have any chance of recovery at all.

Aruna died in May 2015 after suffering pneumonia.

The petition in the case brought out several moral and ethical aspects of the issue that had until now been perceived just as medico-legal issues. While the medical fraternity is sharply divided over issues pertaining to medical ethics in the case of euthanasia, the legal part of it has its own limitations as India’s Constitution recognises the right to life with dignity but does not recognise the right to die.

What is active euthanasia?
Active euthanasia is a deliberate act to cause death in a patient by acts such as injecting an overdose of painkillers, and is not practised in most parts of the world.

What is a living will?
Also termed as “advance medical directive,” it is a direction issued by an individual that “he or she shall or shall not be given medical treatment in future when or he she becomes terminally ill.” Friday’s SC verdict allows every citizen to write a Living Will or advanced directive for his/her end-of-life care. It is a concept associated with passive euthanasia. In a Living Will, one can outline whether or not they want their life to be artificially prolonged in the event of a devastating illness or injury.

What is the government view on passive euthanasia?
The government has no problem with passive euthanasia as devised under the Aruna Shanbaug verdict, but it has opposed Living Will in principle. The Centre, through its draft “Management of patients with terminal illness-withdrawal of medical life support Bill’, tabled in Parliament in 2016, had proposed that patients with terminal illnesses with no chance of revival be allowed passive euthanasia. But it had opposed the concept of Living Will or advanced directive. The Bill, however, has not moved forward since then. 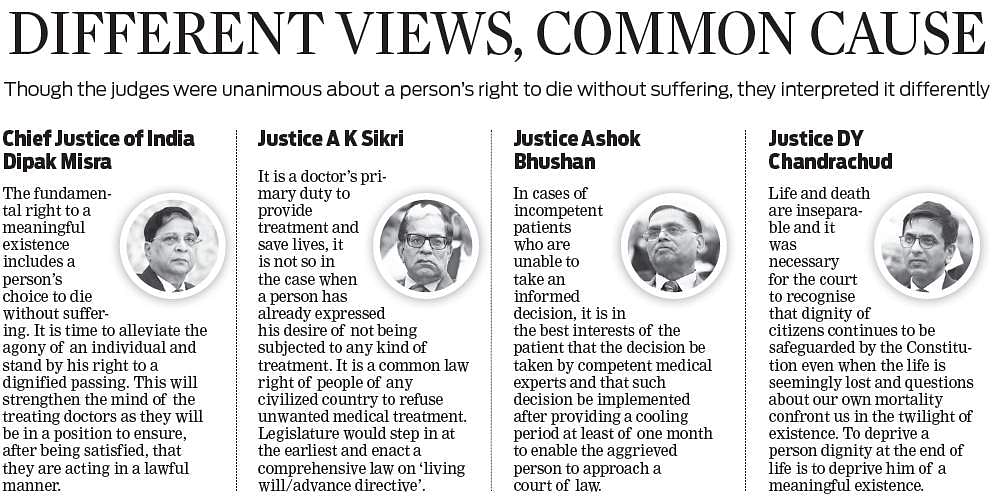