During the talks, both the leaders are expected to review the progress achieved in bilateral relations and exchange views on regional and international issues of mutual interest.

The Ministry of External Affairs (MEA) spokesperson Raveesh Kumar took to Twitter and shared the moment of the two leaders.

"A strategic partnership since 1998! EAM @SushmaSwaraj called on President of France @EmmanuelMacron and exchanged views on further enhancing our strategic partnership in trade & investment, defence & security, culture, education and people-to-people ties," he wrote on the micro-blogging site.

Macron visited Rajghat while being accompanied by his wife, Brigitte Macron and M.J. Akbar, the Minister of State for External Affairs, and paid his tribute at the memorial of Mahatma Gandhi. 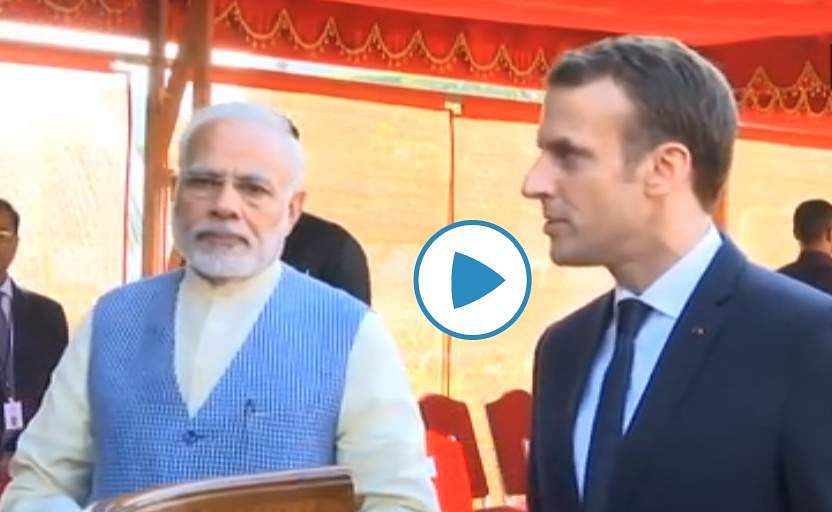 President Macron signed the visitor's book and was presented with a bust of Mahatma Gandhi.

Many foreign leaders have visited Rajghat and have paid their tributes to the 'Father of the Nation'.

Earlier,  President Macron arrived at the Rashtrapati Bhawan and inspected a guard of honour.

During the talks, both the leaders are expected to review the progress achieved in bilateral relations and exchange views on regional and international issues of mutual interest. Several agreements are expected to be signed in various areas.

The ISA, an alliance of more than 121 countries, was initiated by Prime Minister Modi in January 2016. The primary objective of the alliance is to work for efficient exploitation of solar energy to reduce dependence on fossil fuels.

The French President arrived here on Friday and was received at the airport by Prime Minister Modi in a special gesture.

The visit aims at strengthening the bilateral economic, political and strategic dimension of engagement between the two countries. Besides, the visit is also aimed at forging not only strong manufacturing and technology partnerships but also greater people to people contacts.

The last visit of President Macron to India was in January 2016, when he was the chief guest at the Republic Day celebrations. Prime Minister Modi had last visited France in June last year.

Stay up to date on all the latest Nation news with The New Indian Express App. Download now
(Get the news that matters from New Indian Express on WhatsApp. Click this link and hit 'Click to Subscribe'. Follow the instructions after that.)
TAGS
PM Modi Emmanuel Macron French President