President Emmanuel Macron on Sunday announced that France would extend an additional 700 million euros ($861.5 million) through loans and donations by 2022 for solar projects in emerging economies.

NEW DELHI: President Emmanuel Macron on Sunday announced that France would extend an additional 700 million euros ($861.5 million) through loans and donations by 2022 for solar projects in emerging economies.

Macron, who co-chaired the founding conference of the International Solar Alliance at the Rashtrapati Bhavan Cultural Centre in New Delhi with Prime Minister Narendra Modi, said this was over and above the 300 million euros committed by France when it co-founded the global alliance with India in 2015 to help build solar projects in over 120 sunny but poor developing nations lying between the Tropics of Cancer and Capricorn.

“We need to remove all obstacles and scale up,” he told the gathering which had the heads of 23 nations and 10 ministerial representatives as well as CEOs of several financial institutions and energy majors, as well as the UN in attendance. Taking a dig at US President Donald Trump, Macron said these nations continued their mission to promote solar energy even after “some countries decided just to leave the floor and leave the Paris agreement”. In June last year, President Trump withdrew from the Paris Accord on Climate Change, which aims to slow the rise in global temperature by reducing greenhouse gas emissions.

Prime Minister Modi elaborated on a 10-point agenda, which included concessional and less risky financing of solar projects, raising the share of solar electricity in the energy mix, framing rules, standards and regulations to support the initiative, and an eco-system to encourage innovation and entrepreneurship in the domain, to build better storage systems and mass manufacturing of solar products to cut costs. The conference began with External Affairs Minister Sushma Swaraj, who invoked the blessings of the Sun God for the project. 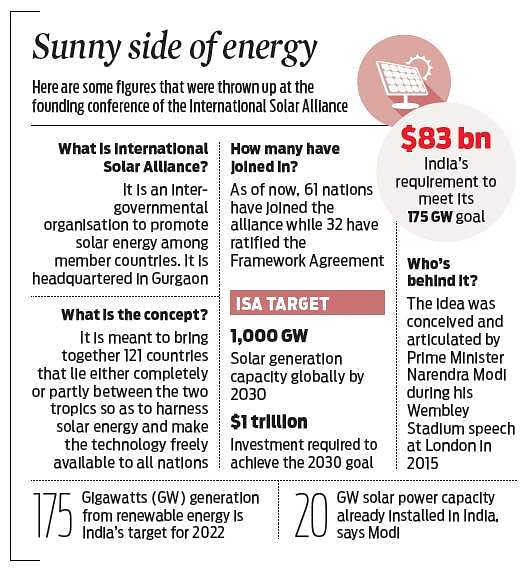 Stay up to date on all the latest Nation news with The New Indian Express App. Download now
(Get the news that matters from New Indian Express on WhatsApp. Click this link and hit 'Click to Subscribe'. Follow the instructions after that.)
TAGS
International Solar Alliance Emmanuel Macron French President