NEW DELHI: Weak finances, poor human resource management, in terms of number of staff, skills and competencies of staff, organisation design and performance management, Powerless mayors and city councils have resulted in poor performances of municipal bodies in the country.

Janaagraha Centre for Citizenship and Democracy, a Bengaluru-based non-profit organization released its Annual Survey of India’s City-Systems (ASICS) report which has ranked cities evaluating quality of governance. While Pune topped the charts, other cities that came in the top five include Kolkata, Thiruvananthapuram, Bhubaneswar and Surat. On the other side, Bengaluru, Chandigarh, Dehradun, Patna and Chennai constituted the bottom five cities.

Low scores strongly signal that Indian cities are grossly under-prepared to deliver a high quality of life that is sustainable in the long term. Recurring floods, garbage crises, fires, building collapses, air pollution and dengue outbreaks are only symptoms of this deeper governance crisis.

Indian cities scored between 3.0 and 5.1 on 10, with Pune topping the charts for the first time.

Overall, India’s cities have continued to score low over the last three editions of ASICS, with average score improving marginally from 3.4 to 3.9.

This indicates slow progress on fixing City-Systems. This is particularly worrisome, given the pace at which India is urbanising and the already poor state of public service delivery. The report underlines the need for sharp focus on institutional reforms to city governance.

“ASICS doesn’t measure quality of infra and services, but instead measures the preparedness of cities to deliver high quality infrastructure and services,” said Anil Nair, deputy head, Advocacy and Reforms at Janaagraha.

“Pune wrested the number one position from Thiruvananthapuram in ASICS 2017. Surat was the biggest gainer, jumping 12 positions over 2016 to the fifth spot. This was on the back of improved performance on own revenue generation, higher capital expenditure per capita by the city and implementation of AMRUT reforms including appointment of an internal auditor and credit rating,” said Vivek Anandan Nair, Associate Manager and project lead on ASICS 2017.

Bhubaneswar stood out for showing steady improvement and moving six positions to fourth this year from the tenth position in 2016. The performance of the two new entrees — Guwahati and Visakhapatnam — was also disappointing with scores of 3.8 and 3.4 respectively.

Significant delay in conduct of council elections in Visakhapatnam and Chennai pulled down the scores there because this has a cascading effect on formation of ward committees among others. 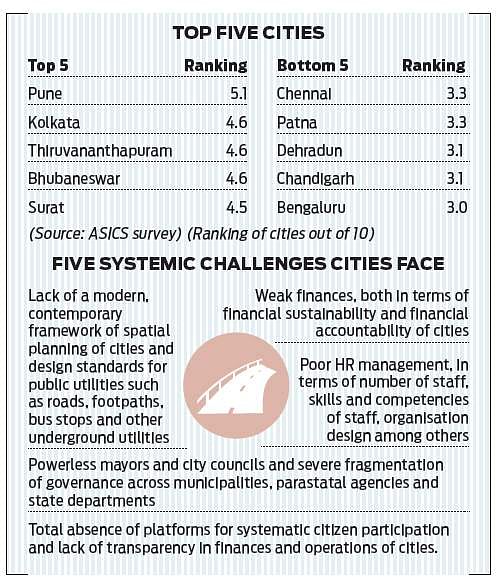