Punjab President of AAP and Member of Parliament from Sangrur, Bhagwant Mann and also co-president of the state unit Aman Arora today resigned from the post of president and co-president of Punjab unit in protest  a day after over apology tendered by his Delhi Chief Minister and National convenor Arvind Kejriwal to former revenue minister Bikram Singh Majithia in the ongoing defamation case for levelling allegations on Majithia’s involvement in drug trade in Punjab.

He was appointed the state party chief in May 2017.

Lok Insaf Party which is AAP’s ally in Punjab announced to break its alliance with the Aam Aadmi Party in Punjab after Kejriwal’s apology to Majithia  “ We have announced to break our alliance with the AAP. We cannot be associated with a party whose main leader meekly surrendered by tendering apology to former minister Bikram Singh Majithia,” LIP leader and MLA Simarjeet Singh Bains said here today. 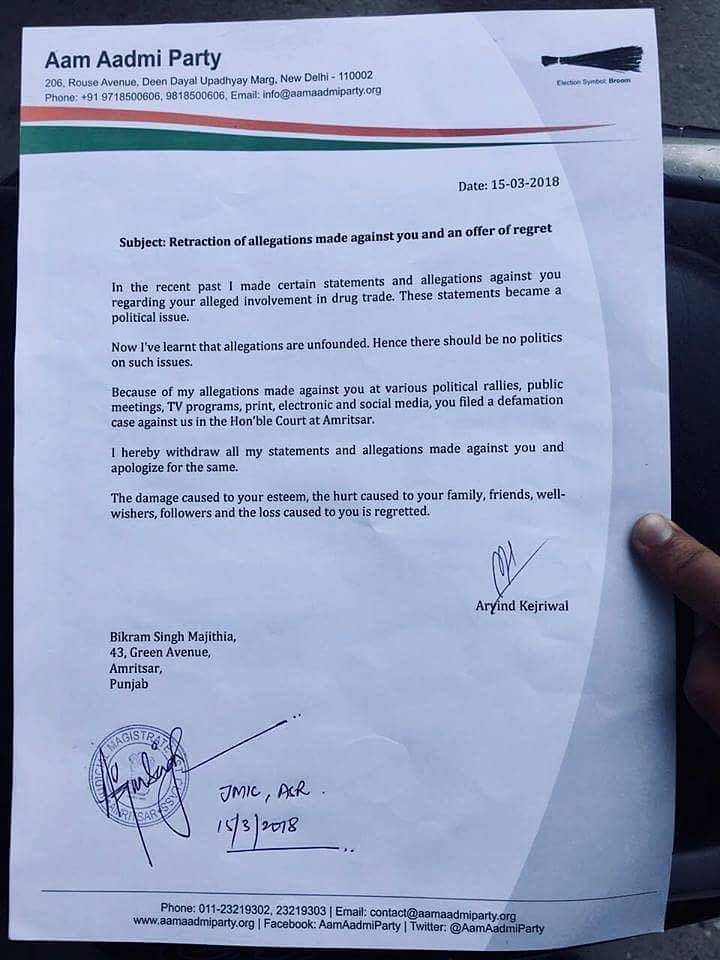 After holding marathon meeting, all the 20 AAP MLAs and leaders condemned AAP's national convenor Kejriwal’ s decision in unanimous voice and termed it as surrender, painful and very
unfortunate. Hey also discussed the possibility of separating from the Delhi unit in the wake of Kejriwal's apology. AAP MLA from Kharar Kanwar Sandhu said,`` No  unanimous decision could be taken on breaking away from the delhi unit as many MLAs felt that views should be taken from volunteers and constituents before taking any further decision. Therefore we have deferred a decision.’’

In the meeting the legislators and leaders were of the option that they were now facing allegations whether Kejriwal had entered into an understanding with Akali Dal by tendering apology to Akali
leader Bikram Singh Majithia.

Senior leader H S Phoolka said that they would support whatever decision AAP leaders from the state take.

"There was only one opinion of all the MLAs here today. All of them condemned (Kejriwal) apology. Moreover, we were not taken into confidence before he tendered an apology and he should have not taken this step," said AAP MLA and leader of opposition Sukhpal Singh Khaira.

He said even state unit chief and co-chief Bhagwant Mann and Aman Arora respectively were also not taken into confidence by Delhi Education minister Manish Sisodia in a meeting held with them
two days back.

"On one side Kejriwal could not understand the ground reality and he was giving his apology and on other hand STF submitted its report in the high court. In such circumstances, Kejriwal's apology was painful, very unfortunate. It is like our big leader while showing psychological weakness, has surrendered," he said.

Khaira said that he was getting numerous messages from volunteers following the
apology by Kejriwal and said that he wanted to ensure that whatever decision is taken, it would be in the interest of Punjab.

In-charge of Punjab affairs of the party and Delhi Deputy Chief Minister Manish Sisodia said after Mann and Arora's resignation that there was no rift in the party over Kejriwal’s apology. All party
leaders are together. ``We’ll talk to them and they will understand,” Sisodia said.

Jakhar maintained that Kejriwal’s apology to Majithia only established the fact that the Aam Aadmi Party and the Shiromani Akali Dal had a secret understanding to divide the anti-incumbency votes against the Akalis. “Their political posturing of criticising each other was only aimed at hoodwinking the people and dividing the anti-incumbency vote to benefit Akalis. The cat is out of the bag with Kejriwal’s meek surrender to Majithia. Kejriwal and his party will have to answer to the people of Punjab and they will never forgive them,’’ he said.

Stay up to date on all the latest Nation news with The New Indian Express App. Download now
(Get the news that matters from New Indian Express on WhatsApp. Click this link and hit 'Click to Subscribe'. Follow the instructions after that.)
TAGS
Arvind Kejriwal Defamation apology Aam Aadmi Party Bikram Singh Majithia Punjab drug trade Punjab AAP