Punjab has the dubious distinction of registering the highest number of drug smuggling cases in the country in 2016.

CHANDIGARH: Punjab has the dubious distinction of registering the highest number of drug smuggling cases in the country in 2016, according to data put out by the Central government.

On an average, 33 cases are registered daily in the state under the Narcotic Drugs and Psychotropic Substances (NDPS) Act and about 37 people arrested by Punjab police and the Special Task Force. 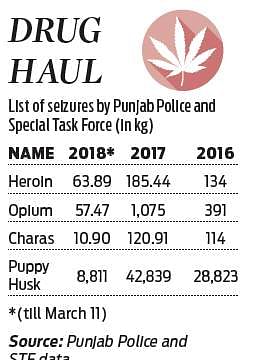 In 2017, a total of 12,196 drug smuggling cases were registered in the state under the Act and 13,842 people arrested. With the number of cases having more than doubled in a year, it could well be that the state still retains the dubious distinction it earned in 2016.The complete data for 2017 have not yet been put out by the Centre.

Till March 11 this year, 2,283 cases have already been registered in the state and 2,573 people arrested, including 12 cops.

With a view to checking rampant drug abuse, the government is set to launch a Drug Abuse Prevention Officer Programme. Work to enroll volunteers for it has already begun. Alongside, an aggressive social media campaign — on Facebook, WhatsApp, Twitter and YouTube — will be launched.

Additional DG and STF chief Harpreet Singh Sidhu said, “The volunteers will be the eyes and ears of the government. They will create awareness, facilitate de-addiction, protect vulnerable people and coordinate with the administration. They will be trained and issued identity cards. Chief Minister Amarinder Singh will lead an oath-taking ceremony for the public on March 23, the martyrdom day of Shaheed Bhagat Singh, from Khatkar Kalan.”

Stay up to date on all the latest Nation news with The New Indian Express App. Download now
(Get the news that matters from New Indian Express on WhatsApp. Click this link and hit 'Click to Subscribe'. Follow the instructions after that.)
TAGS
Punjab drug smuggling Narcotic Drugs