The encounter broke out in Arampora area of the district yesterday, after security forces launched an operation in the wake of militants opening firing on an Army patrol party.

SRINAGAR: Three army men and two policemen and five militants were killed in the ongoing encounter in forest area of border district of Kupwara in Jammu and Kashmir.

The gunfight started on Tuesday afternoon after militants fired on the joint party of police and army men, who were conducting combing and search operation in the forest area after receiving inputs about presence of militants there.

Pani said two policemen were killed and a Special Police Officer injured in the gunfight today.

He said two militants were also killed today while three died in the gunfight yesterday.

He said the combing operation in the area was going on.

The deceased policemen were identified as Mohammad  Yousuf Cheche of Kachama, Kupwara and Deepak Thesoo of Nagrota, Jammu. 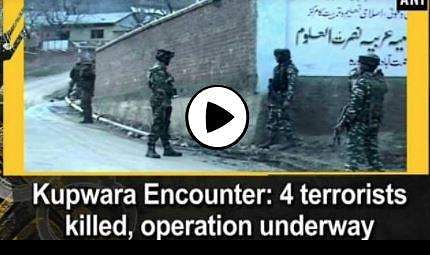 Two of the deceased army men were identified as sepoy Ashraf Rather of 160 TA and Naik Ranjeet Kholka of 5 Bihar .

Police sources said the slain militants were foreigners and belonged to Lashkar-e-Toiba.

They said it is suspected that the militants were part of a freshly infiltrated group.

Sources said it was being ascertained whether the group comprised five militants only or more militants are present in the area.

Additional troops including para commandos have been rushed to the area to tighten the siege and help the security men present in the area in conducting the searches.

A police official said owing  to thick vegetation and low  visibility , security forces are mopping the area with due caution to avoid casualties in the militant firing.

In view of less snowfall in the Valley this year, army has increased vigil along the LoC to foil the infiltration attempt of militants.

Army officials apprehend rise in infiltration attempts in coming days in view of less snowfall in the upper reaches.

She expressed solidarity with the families of the deceased and prayed for peace to the departed souls.

Stay up to date on all the latest Nation news with The New Indian Express App. Download now
(Get the news that matters from New Indian Express on WhatsApp. Click this link and hit 'Click to Subscribe'. Follow the instructions after that.)
TAGS
Jammu and Kashmir Kupwara militant attack