The opposition Congress with the support of 39 MLAs is betting on an OBC candidate against BJP’s national general secretary Saroj Pandey for the lone Rajya Sabha seat from Chhattisgarh.

RAIPUR: The opposition Congress with the support of 39 MLAs is betting on an OBC candidate against BJP’s national general secretary Saroj Pandey for the lone Rajya Sabha seat from Chhattisgarh. The elections for 58 crucial seats in Rajya Sabha will be held on March 23.

Ahead of the polling, the Congress leaders claimed that the OBC MLAs, mainly those from the Sahu community, will vote in favour of the party candidate. “We have contacted all MLAs for their support and the party will gain,” Leader of Opposition T S Singhdeo said.

Keeping an eye on the strength of OBC voters in an election year, the Congress despite lacking the requisite strength of 46 in the House, has fielded Lekhram Sahu. The party leaders believe that even if they lose the Rajya Sabha election, it will benefit the Congress during the upcoming Assembly polls.

The Ajit Jogi-led Chhattisgarh Janta Congress (J) has already declared their support for the Congress candidate.

“We know the Congress is only symbolically contesting the Rajya Sabha election. We have sufficient votes. Our victory remains beyond doubt,” said Chief Minister Raman Singh.

The Congress leaders hinted that they are also eyeing the support from those BJP MLAs who may be denied ticket for the Assembly poll. “The Congress is day-dreaming of winning the Rajya Sabha poll,” BJP spokesperson Shivratan Sharma retorted.

Both the parties are apprehensive of cross voting. They have asked their MLAs to be in Raipur by Thursday evening. “The BJP has the habit of luring the MLAs from opposition camps. But we will not allow that to happen,” Congress state chief Bhupesh Baghel said. 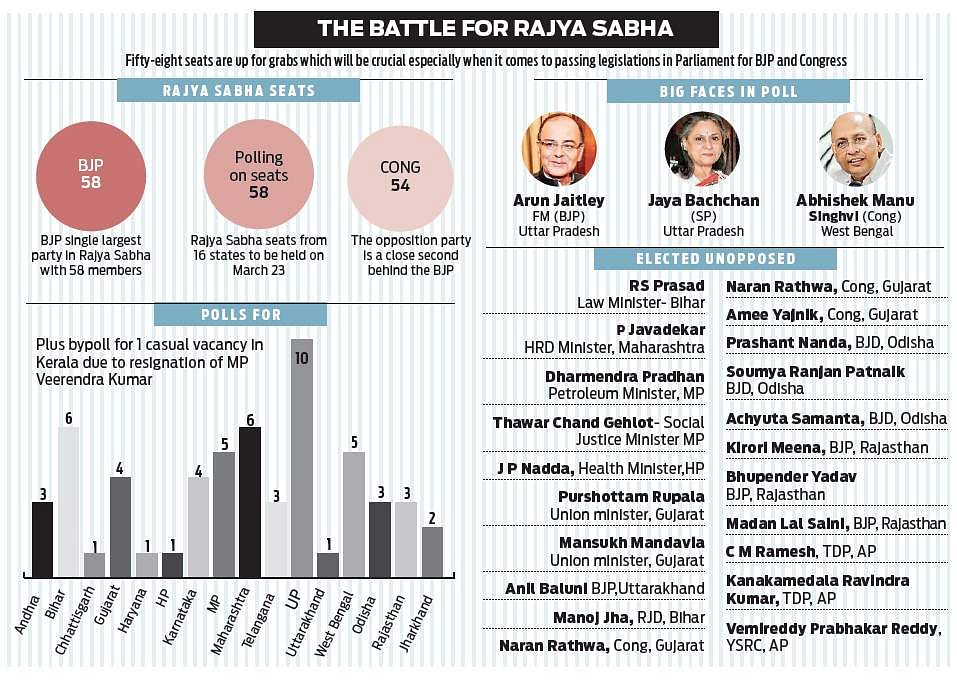 Stay up to date on all the latest Nation news with The New Indian Express App. Download now
(Get the news that matters from New Indian Express on WhatsApp. Click this link and hit 'Click to Subscribe'. Follow the instructions after that.)
TAGS
Rajya Sabha Chhattisgarh Saroj Pandey