Madhya Pradesh: Man drives burning truck away from petrol pump to save lives in Narsinghpur

The petrol tanker caught fire on Sunday while it was being emptied at a petrol pump.

BHOPAL: A 30-year-old truck driver, Sajid Khan, drove a burning fuel tanker for around five kilometres, potentially averting a tragedy and saving many lives in Gotegaon town of Narsinghpur district on Sunday night.

Without caring for his life, the brave driver from Seoni district of Madhya Pradesh drove the burning vehicle through residential areas in Gotegaon, a town of 25,000 people about 250 km from Bhopal, towards the Gotegaon-Narsinghpur Road, leaving behind a trail of fire caused by leaking petrol that gutted a few shops and vehicles but didn’t cause any human casualty.

The tanker was refilling fuel at a petrol pump in the crowded main market in Gotegaon when the petrol caught fire, possibly due to an electrical short circuit. 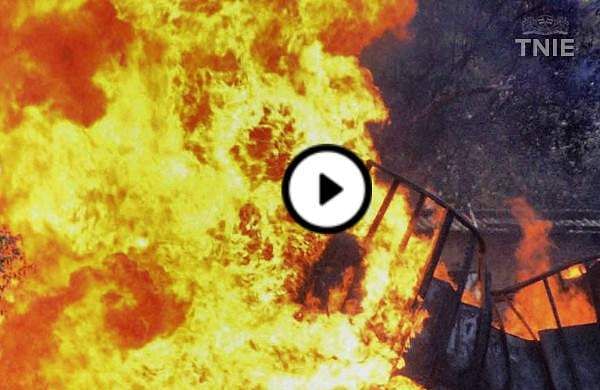 Stay up to date on all the latest Nation news with The New Indian Express App. Download now
(Get the news that matters from New Indian Express on WhatsApp. Click this link and hit 'Click to Subscribe'. Follow the instructions after that.)
TAGS
Madhya Pradesh’s Narsinghpur oil tanker driver Narsinghpur