A study by health researchers from India, US, Germany and Belgium says that India has emerged as the leading consumer of antibiotics worldwide in humans by total volume between 2000 and 2015.

NEW DELHI:A study by health researchers from India, US, Germany and Belgium says that India has emerged as the leading consumer of antibiotics worldwide in humans by total volume between 2000 and 2015.Also worryingly, use of last-resort antibiotic drug cephalosporins has increased dramatically in India and the per capita use of this class of drug is higher than most High Income Countries (HICs), the study which has been published in the National Academy of Sciences says.

Consumption of linezolid, another class of strong antibiotics has also increased dramatically in India, and since 2012 it has been the greatest consumer of this drug. The study, which analysed human antibiotic consumption in 76 countries, is the most comprehensive assessment of global trends to date. Researchers from the Center for Disease Dynamics, Economics & Policy, Princeton University, Germany and the University of Antwerp conducted the study, which found that antibiotic consumption rates increased worldwide from 11.3 to 15.7 Defined Daily Doses (DDD) per 1,000 inhabitants per day between 2000 and 2015.

DDD is a statistical and standardised measure of drug consumption and represents the assumed average maintenance dose per day for a drug used for its main indication in adults.Despite the threat of a global health crisis in antibiotic resistance, worldwide use of antibiotics in humans soared 39 per cent between 2000 and 2015, fuelled by dramatic increases in Low and Middle-Income Countries (LMICs).

Amongst LMICs, India, saw the highest increase of 103 per cent in antibiotic use, followed by China and Pakistan, between 2005-2015. In the same period, India’s antibiotic consumption rate increased from 8 to 13.6 DDDs per 1,000 inhabitants per day compared to only a marginal increase in HICs including US, France and Italy.

Total global use of antibiotics in humans was estimated to be 35 billion DDDs in 2015, a 65 percent increase from 2000, while the consumption rate increased 39 percent, from 11.3 to 15.7 DDDs per 1,000 inhabitants per day.CDDEP director and study co-author Ramanan Laxminarayan said more than a year has passed since the UN General Assembly recognised the global threat of antibiotic resistance, yet little action has been taken since then. “We must act decisively and we must act now,” he said. 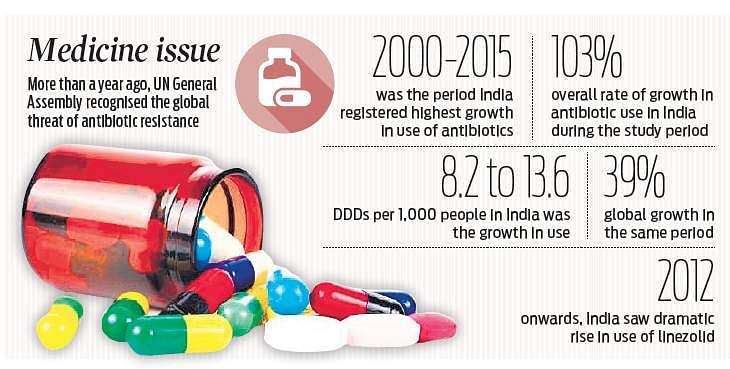 Stay up to date on all the latest Nation news with The New Indian Express App. Download now
(Get the news that matters from New Indian Express on WhatsApp. Click this link and hit 'Click to Subscribe'. Follow the instructions after that.)
TAGS
India antibiotics antibiotic consumers