More than 90 per cent street children in Delhi drug-addicts

According to the ministry, 46,410 cases of substance abuse by street children were reported in the national capital last year.

NEW DELHI: More than 90 per cent of street children in Delhi are addicted to drugs, according to information from Ministry of Social Justice and Empowerment.According to the ministry, 46,410 cases of substance abuse by street children were reported in the national capital last year. Of these, most of them were found to be addicted to tobacco (21,770), followed by alcohol (9,450), inhalants (7,910) and cannabis (5,600). Other drug substances included heroin (840), opium (420), pharmaceutical opioids (210) and sedatives (210).

In a written reply on the issue, Minister of State for Social Justice and Empowerment Vijay Sampla shared this data with the Lok Sabha on Tuesday. The statistics were based on a recent study by the All India Institute of Medical Sciences (AIIMS).

According to a study done by the NGO ‘Save the Children’ in 2011, there were 50,923 children who live on streets in Delhi. Going by that population, the percentage of drug-addicted children in Delhi is 91.14 percent.According to National Crime Records Bureau, 53 and 34 unnatural accidental deaths were reported due to drug overdose by children below 18 years during 2015 and 2016 respectively.  In 2015, most number of such deaths were reported from Punjab (13), followed by Maharashtra (12) and Gujarat (8). In 2016, Uttar Pradesh (10) recorded maximum number of drug abuse-related deaths among children, followed by Madhya Pradesh (6) and Punjab (5).

Sampla informed Parliament that the ministry is implementing a scheme titled ‘Central Sector Scheme of Assistance for Prevention of Alcoholism and Substance (Drug) Abuse’ to curb the issue. The scheme provides financial assistance to eligible NGOs, Panchayati Raj institutions and urban local bodies, who in turn provide composite/integrated services for the rehabilitation of addicts.On August 11, 2016, the ministry had issued an advisory to all states and UTs asking them to take steps for prevention of substance abuse among children. 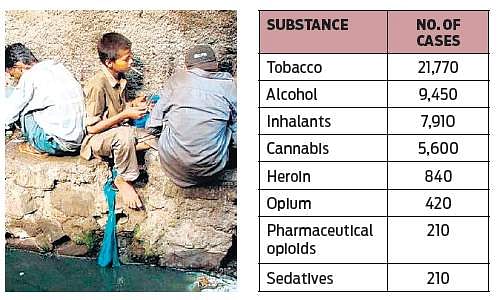 Now we are on Telegram too. Follow us for updates
TAGS
street children Delhi drug-addicts Ministry of Social Justice and Empowerment