Steep rise in crimes against women in Mumbai

Mumbai has seen a 96 per cent increase in rape cases and a 165 per cent rise in molestation cases over the last four years, according to data from the annual report of the Praja Foundation.

MUMBAI: Mumbai has seen a 96 per cent increase in rape cases and a 165 per cent rise in molestation cases over the last four years, according to data from the annual report of the Praja Foundation on the state of law, order and policing in the city. 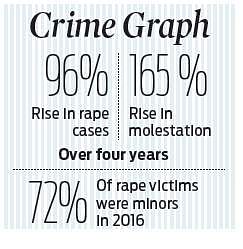 “Between 2012-2013 and 2016-2017, reported cases of rape increased 96 per cent and reported cases of molestation increased 165 per cent. The data also reveals the shocking state of safety of children in the city. Of the total rapes reported for 2016, female children accounted for 72 per cent,” said Milind Mhaske, Project Director of Praja Foundation, while presenting the Annual Report on State of Policing and Law and Order in Mumbai.

The data for the report was collected through Right to Information queries on various parameters, including a study into cases tried at the session’s court level, which has also exposed the chronic failures in the criminal justice system, Mhaske said.

“It currently takes an average 12.3 months for a sessions case to go from first hearing to final judgment. In the 60s, the cases would be adjudicated within a session and took approximately 10 to 15 days,” he said.
The reports show that the conviction rates for Class II serious offences, tried at the sessions court level, was a dismal 7 per cent in 2012. This has climbed to 19 per cent in 2016. Although crimes against women have increased over the years, conviction rate remains low.

Stay up to date on all the latest Nation news with The New Indian Express App. Download now
(Get the news that matters from New Indian Express on WhatsApp. Click this link and hit 'Click to Subscribe'. Follow the instructions after that.)
TAGS
crimes women crimes against women Mumbai