In its closure report, the agency said that despite its best efforts, Najeeb could not be traced and the CBI did not have information about his whereabouts.

NEW DELHI:  Exactly two years after JNU student Najeeb Ahmad went missing from the university campus, the CBI on Monday filed a closure report in the case.In its closure report, filed following a Delhi High Court order, the agency said that despite its best efforts, Najeeb could not be traced. “We wrote letters to DGP/ chief secretaries of all states. Teams were sent to Himachal Pradesh, Maharashtra and Delhi after receiving tip offs. 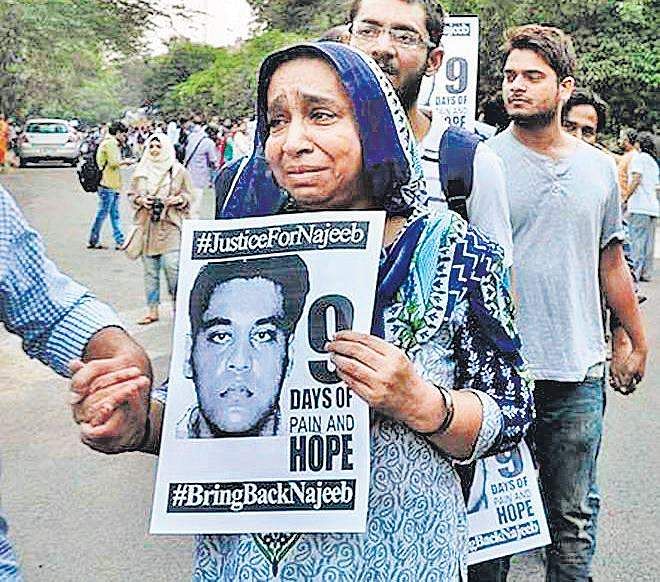 A reward of `10 lakh was announced for any information leading to Najeeb and his photographs were circulated across the country. Even then, we could not get any information about him,” the report said.

Najeeb’s mother Fatima Nafees had last week moved Delhi HC, which declined her plea to constitute a Special Investigation Team (SIT) and monitor the probe and instead allowed the CBI to file a closure report. A city court will decide on November 29 if the close report filed would be accepted or not.

The CBI’s move sparked protests from Najeeb’s mother and others who held a protest march from Mandi House to Parliament Street in the heart of the national capital against the “fudged” probe.

Those who joined the protest, organised by the NGO United Against Hate, included Radhika Vemula, mother of Hyderabad University student Rohith Vemula who had committed suicide; Saira, mother of Junaid who was stabbed to death on a Mathura-bound train; and Ashiana Theba, wife of Majid Theba who went missing in Gujarat.

“The struggle to find Najeeb will continue. We will knock at the doors of Supreme Court and ask for a Special Investigation Team to investigate and find my son,” Fatima said. Lending support to her, Radhika Vemula said the government should shut investigative teams if they failed.  Najeeb, an MSc (Biotechnology) student, had gone missing on October 15, 2016.

Now we are on Telegram too. Follow us for updates
TAGS
JNU student Najeeb Ahmad