The Centre is likely to conduct a survey in 150 more districts across more than 18 states to identify manual scavengers.

NEW DELHI: The Centre is likely to conduct a survey in 150 more districts across more than 18 states to identify manual scavengers.

In the first phase of the survey now being conducted, over 53,000 people have come forward and identified themselves as manual scavengers. Of these, the National Safai Karamcharis Finance and Development Corporation (NSKFDC), the nodal agency conducting the survey for the Ministry of Social Justice and Empowerment - has taken cognizance of over 20,000 people. Of the 170 districts identified in the first phase, the survey has been conducted in 156 districts so far.

The second round of the survey will include fresh districts from the states included in the first round. The final list of districts is yet to be finalised. "We are likely to include two to three more states which have not been included in the first round. These include Odisha and Himachal Pradesh. The categories will remain the same for identifying manual scavengers - those cleaning dry latrines, open drains where faecal matter goes, and pit latrines," said an NSKFDC official.

The states covered in the first phase -- Uttar Pradesh, Rajasthan, Gujarat, Maharashtra, Madhya Pradesh, Kerala, West Bengal, Telangana, Assam, Andhra Pradesh, Tamil Nadu, Bihar and Jammu and Kashmir, among others -- are likely to feature in the second round. It will take at least five to six months to complete the second round of the survey after the final decision to conduct it is taken across the states, according to the NSKFDC.

Ashif Shaikh from the Rashtriya Garima Abhiyan said there was a need to identify more manual scavengers and recognise those who were still involved in the work in order to rehabilitate them.

"We cannot really call this a survey as each district is holding one or two camps where manual scavengers are supposed to turn up. In many cases, they even find it difficult to pay for conveyance," said B Wilson of the National Safai Karamchari Andolan. 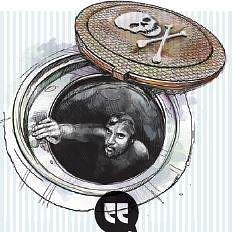 Prohibition of Employment as Manual Scavengers and their Rehabilitation Act, 2013

It is illegal to employ manual scavengers under the Act. Those employing manual scavengers should immediately discharge every person engaged in this work. Under section 8 of this Act, a person violating this will be punishable with imprisonment for up to two years or a fine of up to I2 lakh or both. For any subsequent violations, the imprisonment may extend up to five years and the fine can go up to I5 lakh or both.

The Ministry of Social Justice and Empowerment is conducting a survey to identify manual scavengers. Safai Karamchari Andolan and Rastriya Garima Abhiyan, an NGO, have been roped in for the field visits and to conduct camps across the states. The National Safai Karamchari Finance & Development Corporation has been appointed as the nodal agency to conduct the survey. NGOs said there were reports of people coming to submit their forms being turned away by district officials.