Lok Sabha elections 2019: Caste factor in fore among farmers in western UP

A cross section of farmers across the region made it abundantly clear that agrarian distress is an issue of discourse, but not that big to galvanise the farming community during polls.

MUZAFFARNAGAR: Lush green wheat crops standing alongside sugarcane fields mark the rural landscape of western parts of Uttar Pradesh. Blessed with extensive irrigation network and fertile land, farmers in the region are seen as more affluent than their counterparts in other parts of the state.

But notwithstanding the scenario, farmers’ stressed income is a huge debating point, though hectic electioneering has tended to push the issue of agrarian distress to the backburner for now. However, caste — the all-pervading, all-consuming factor — has come to the fore as the single issue that would decide the polls. 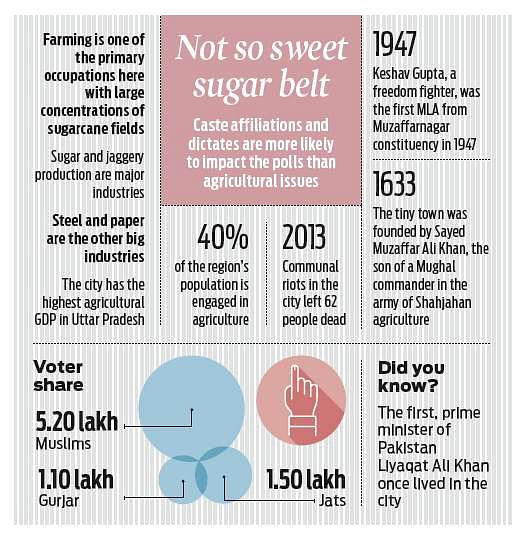 A cross section of farmers across the region — Baghpat, Muzaffarnagar, Kairana and Saharanpur — made it abundantly clear that agrarian distress is an issue of discourse, ‘but not that big’ to galvanise the farming community to influence their individual voting choices.

“None of the promises to implement the Swaminathan Commission report, including minimum support prices (MSP), have been implemented. Union Minister Rajnath Singh, in the run-up to the 2014 polls, had promised to increase support prices of sugarcane by 50 per cent, but it wasn’t fulfilled,” noted Jaiveer Singh, a Jat in Kutba village in Muzaffarnagar, from where the incumbent MP Sanjeev Balyan hails.

However, he added, “Farmers aren’t a voting block, as they are flocking to candidates on caste lines and issues not related to agriculture.”

The farmers said they face a number of problems in realising a good price for sugarcane sold to sugar mills.

“UP’s sugar minister Suresh Rana hails from the region. Yet, we don’t get support in paperwork, while our gain is just about Rs 50 a quintal after factoring in all costs. But farmers are looking at larger issues, including an effective government at the Centre, when it comes to making electoral choices,” Shekhar Pundir, a Rajput of Sisouli village in Kairana Parliamentary constituency, said.

The announcement of directly crediting Rs 6,000 annually in three installments of Rs 2,000 each by the incumbent NDA government, with an eye on the polls, has fuelled animated discussions amongst the farming community.

“My family is fully dependent on agriculture and in times of reduced income, Rs 6,000 is an insult to us. It (NDA) could have raised minimum support price (MSP) by 50 per cent, as advocated by experts,” Mukul Sharma, a Muzaffarnagar resident, said.

Rajat Balyan, a young Jat and millennial voter retorted, “This government announced it will spend Rs 75,000 crore annually for farmers. It’s a measure not undertaken by any previous dispensation. Should the government not undertake other activities like development projects and only dispense cash to people?” Balyan said.

Despite the agrarian woes that farmers are confronted with, the common discussion thread among them appeared to be caste when it comes to voting choices. Asked which way their support would go, a cross-section of farmers unhesitatingly claimed that at the end of the day, caste will supersede the real issues.

“Agrarian distress isn’t a legacy of this government. It has been there for decades. People have a tendency to condemn the incumbent government on the eve of elections. But at the time of casting their votes, they follow caste affiliations,” Lalit Kumar. a resident of Sisouli village in Muzaffarnagar said.