More than 2 lakh people were forcibly evicted and over 40,000 houses demolished across India last year, according to a report released by the Housing and Land Rights Network on Tuesday.

NEW DELHI: More than 2 lakh people were forcibly evicted and over 40,000 houses demolished across India last year, according to a report released by the Housing and Land Rights Network on Tuesday.

The estimates show that over 114 houses are being demolished every day and 23 people are being evicted every hour in the country by the Centre and state governments, the advocacy group’s report said.
This comes at a time when the ruling BJP has highlighted ‘housing for all’ in its manifesto for the Lok Sabha elections.

The report documents cases from 19 states and two Union Territories, and the actual numbers are likely to be higher than the report’s estimates, the HLRN said. While slum-clearance, anti-encroachment and city beautification drives displaced 47 per cent of the people affected, infrastructure and ‘development’ projects, including the construction of roads and highways, housing and ‘smart-city’ projects, led to the eviction of 26 per cent of the people displaced. 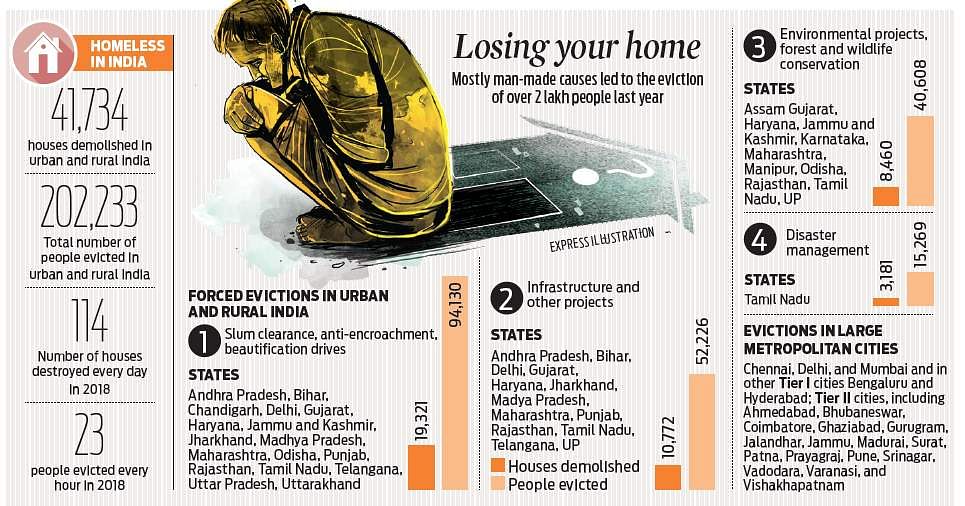 Environmental projects, forest protection and wildlife conservation contributed to the displacement of around 20 per cent of the affected population, and another 8 per cent were evicted due to disaster management, according to the findings of the report, ‘Forced Evictions in India in 2018: An Unabating National Crisis’.

Another 11.3 million people across India live under the threat of eviction and potential displacement with the reasons varying from infrastructure projects, forest protection, restoration of water bodies to the implementation of court orders, and from the removal of ‘encroachments’ to tourism development, documented the report. “Despite the scale of the problem, it is not an election issue,” said Shivani Chaudhry, executive director, HLRN.

Activists said the issue of housing and displacement of the poor should be a major election issue and not be treated as routine.

“The number of people losing their settlements keeps adding up over the years. The poor build their houses over the years and they lose everything in minutes,” said Usha Ramanathan, independent law researcher.

Most cases related to the right to adequate housing pertain to the obligations of the state, specifically protection against forced and arbitrary eviction, according to an analysis by HLRN of judgements from high courts in the country.

The relief provided in such cases is mostly limited to invalidating the eviction.

In some cases, courts directed the provision of alternative accommodation before the eviction was carried out.

The report showed that reliance on ‘legality’ to determine the rights of affected persons goes against the concept of the right to adequate housing.