Beijing has continued to outspend India on defense, implemented sweeping reforms in its military and diplomatic structures, and built strategic infrastructure in India’s backyard.

Prime Minister Narendra Modi made a rare national address on live television last month to boast that India had destroyed a satellite in low orbit, establishing itself as a “space power” alongside the U.S., Russia and China.

For a leader who lambasted his predecessor for failing to counter long-term geopolitical foe China, the missile test was a moment of “utmost pride.” Yet China conducted a similar test more than a decade ago in 2007, prompting critics to note that India’s show of strength was merely highlighting the wide strategic gap between the world’s two most populous countries.

Modi’s ruling party is making his record on national security a key part of its campaign in an election that will conclude on May 23, with boasts of airstrikes against Pakistan and more than 80 trips abroad to cement India’s reputation as a rising economic power. His government refused to attend Chinese President Xi Jinping’s Belt and Road infrastructure forum that kicked off Friday.

Yet for all that, India has only fallen further behind China over the past five years. Beijing has continued to outspend India on defense, implemented sweeping reforms in its military and diplomatic structures, and built strategic infrastructure in India’s backyard -- not to mention providing arch-rival Pakistan with defense technology. China continued to pull ahead of India in defense spending since Modi took office.

ALSO READ | Decoding Mission Shakti: A peek into the technology that made India a space power

“It’s impossible to keep pace with China,” said Vishnu Prakash, a former Indian ambassador to South Korea and consul general in Shanghai. “We cannot get into checkbook diplomacy with China. We don’t have that kind of economic muscle.”

Whether Modi returns to power or not, India’s next government will still be saddled with aging equipment like Soviet-era MiG warplanes, a bureaucracy that hinders military upgrades and an undersized diplomatic corps. To fend off China, it’s likely to continue shifting toward the U.S. and other like-minded countries in Asia while seeking to protect its periphery.

“A major long-run test for India is to ensure that China does not turn India’s own geography against it by encircling it with a string of military bases in the Indian Ocean,” said Rory Medcalf, who heads the National Security College at the Australian National University. “Delhi will play a long game. As India’s economy grows, this will still eventually translate into the world’s third-largest defense budget.” 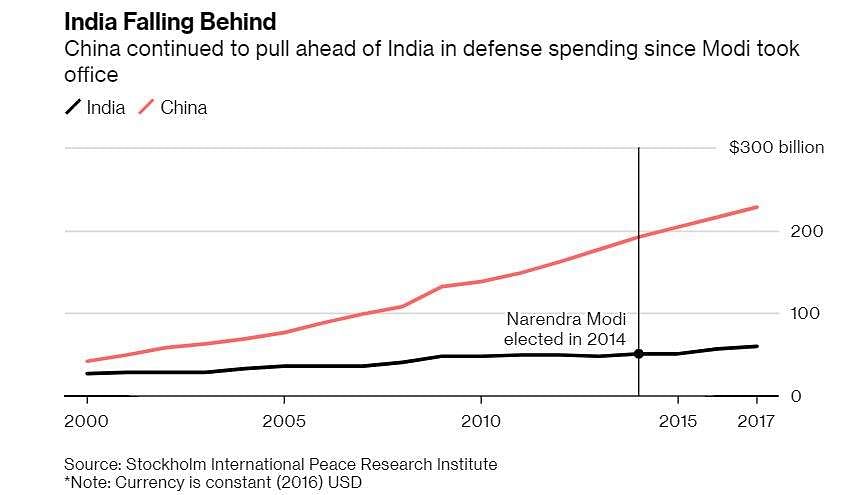 Under Modi, the country has skillfully handled its relationship with China, increased defense spending and granted the armed forces greater autonomy, said G.V.L. Narasimha Rao, an Indian lawmaker and spokesman for the ruling Bharatiya Janata Party.

"Admittedly, China has a much larger economy and defense budget in line with its own needs and plans," Rao said. "India is not in any arms race with any country and has a defense budget that is adequate as per its needs. Streamlining the armed forces and reforms has been an ongoing process."

Still, India continues to lag China on every geopolitical metric, according to the Lowy Institute’s Asia power index, which ranks countries according to economic resources, military capabilities and diplomatic influence.

That lopsided situation is echoed in the armed forces. Xi has overseen China’s most sweeping military reforms since the 1950s, cutting back non-combat personnel and modernizing its military technology with space and cyber operations. Meanwhile, India maintains a sprawling 1.4-million strong army and spends the bulk of its defense money on salaries and pensions, rather than new equipment. 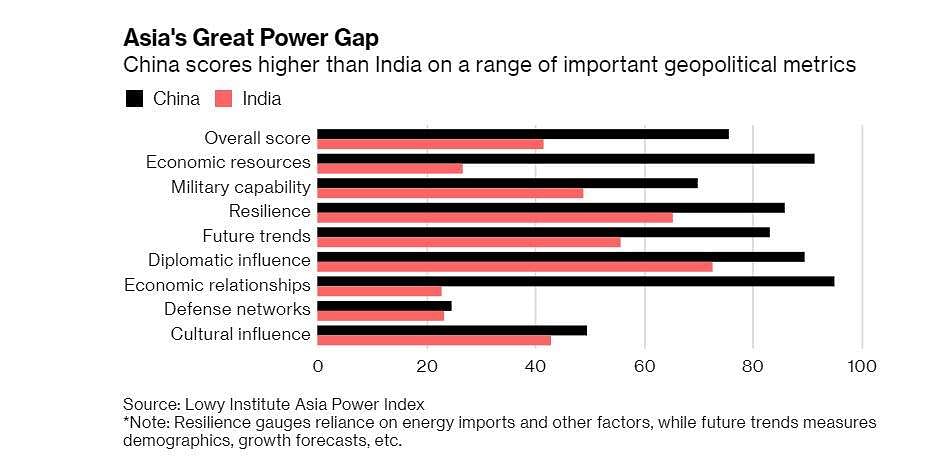 Even Modi’s announcement of the anti-satellite missile test will be mostly useless against China, according to Vipin Narang, an MIT associate political science professor.

“Not only does China have more satellites that India would likely have to kill, but China may have an advantage in killing Indian satellites,” Narang said.

‘Diplomatic Clout’
One of Modi’s major shifts has been greater alignment with countries seeking a counterweight against a rising China, in addition to dealing with a range of nations like France, Israel and Russia that want to sell it weapons.

The U.S. in particular has sought to engage India, renaming its Asia-facing military operations to the Indo-Pacific Command last year and seeking to enlist it in a group known as “The Quad” along with Japan and Australia.

“China sees real risk in India’s strengthening security ties with a formidable array of Indo-Pacific partners including America, Japan, Australia, Indonesia, France and Vietnam,” ANU’s Medcalf said. “The U.S. and others do not need India as a formal ally or as a full rival with China. They simply need India to be itself -- a capable and growing power in the Indian Ocean, whose navy can complicate life for China and whose diplomacy proves every day that China does not speak for Asia.”

China and India have managed to keep a lid on tensions. After a tense stand-off high in the Himalayas when Chinese and Indian troops faced off at a border area with Bhutan, a subsequent one-on-one summit between Modi and Xi defused tensions. 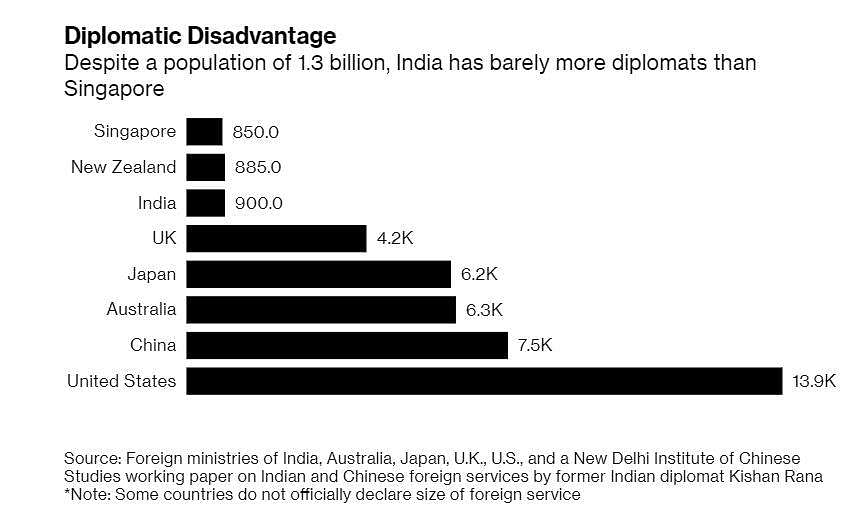 “Competition is everywhere, including between India and China, but the key point here is the essence of the competition,” said Wang Peng, an associate research fellow of the Chongyang Institute for Financial Studies at the Renmin University of China. “India and China have the potential for benign competition.”

Beijing has also kept India out of the Nuclear Suppliers Group, which controls the export of nuclear materials, and recently blocked Indian and Western efforts at the United Nations to list as a designated terrorist the leader of a group that claimed responsibility for a suicide bombing that killed 40 Indian paramilitaries.

“In some ways, India is better off strategically than it was five years back,” said Alyssa Ayres, a former U.S. diplomat and senior fellow for South Asia at the Council on Foreign Relations in New York. “But you could, of course, also argue that India is falling further behind China instead of slowly closing the gap.”

— With assistance by Peter Martin

Stay up to date on all the latest Nation news with The New Indian Express App. Download now
(Get the news that matters from New Indian Express on WhatsApp. Click this link and hit 'Click to Subscribe'. Follow the instructions after that.)
TAGS
PM Modi China Indian defence pakistan Mission Shakti satellites Indo China ties CPEC Belt and Road