No schools on Monday in five districts of Maharashtra

Two old residential structures collapsed, but there were no casualties.

MUMBAI: Schools and colleges in five districts will remain closed on Monday in Maharashtra where an IAF helicopter rescued 58 people in Thane district as heavy rains breached check dams and canals, and affected rail, road and air traffic.

The IMD has predicted very heavy rains for the next 48 hours in Mumbai, Thane, Palghar along with other coastal districts and extremely heavy rainfall at isolated places. The BMC advised Mumbaikars not to venture into sea or in water-logged areas. 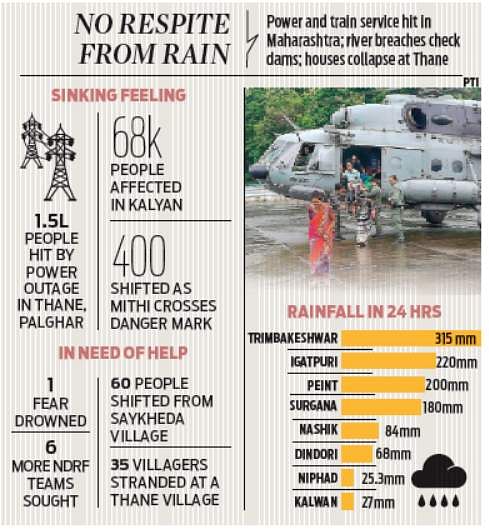 Water-logging in Mumbai disrupted suburban rail services with trains either being delayed or suspended. Operations at Mumbai airport are getting delayed, with some flights being cancelled. In Mumbai, a man was washed away in Rajiv Gandhi Nagar area.

The IAF airlifted 58 people from a village in Kalyan taluka. On Sunday morning, Kalyan-Karjat railway service was shut down due to heavy water logging in Badlapur area where the Mahalaxmi Express was stranded last week. It may take more than two days to normalise rail traffic as floods are said to have caused heavy damage to the signalling system.  Kalyan-Kasara line remained closed.

While rain water inundated residential areas in Bhiwandi, Thane and Kalyan, major roads in the area like Kalyan-Bhiwandi, Kalyan-Sheelphata and Kalyan-Murbad remained closed due to waterlogging.
Traffic on Mumbai-Nashik highway too remained restricted due to the swollen Darna river near Gonde village.

The renowned Trimbakeshwar temple near Nashik was flooded, while several other parts of the district, including Nashik city, was flooded. Two old residential structures collapsed, but there were no casualties.