With the water receding, the people at relief camps are expected to start returning home from Tuesday.

MUMBAI: The Pune-Bengaluru national highway was partially reopened for traffic on Monday after six days as floodwaters receded. The highway, along with several other roads in the Kolhapur-Sangli area, was under several feet of water for almost a week, making relief work difficult.

With the traffic restored, relief material has started reaching Kolhapur and Sangli.

Traffic movement between Kolhapur and Belgaum in Karnataka began on one lane on the Shiroli bridge on the six-lane NH-4, where thousands of vehicles were stuck after the highway was submerged in floodwaters last week.

“The water level has come down and Shiroli bridge can be used for vehicular movement. We have so far decided to open only one lane on either side of the national highway as a precautionary measure,” said Abhinav Deshmukh, Superintendent of Police in Kolhapur.

In all, 761 villages in 70 blocks in nine districts of Maharashtra are affected by the flood, and relief operations are underway at all these places.

With the water receding, the people at relief camps are expected to start returning home from Tuesday. 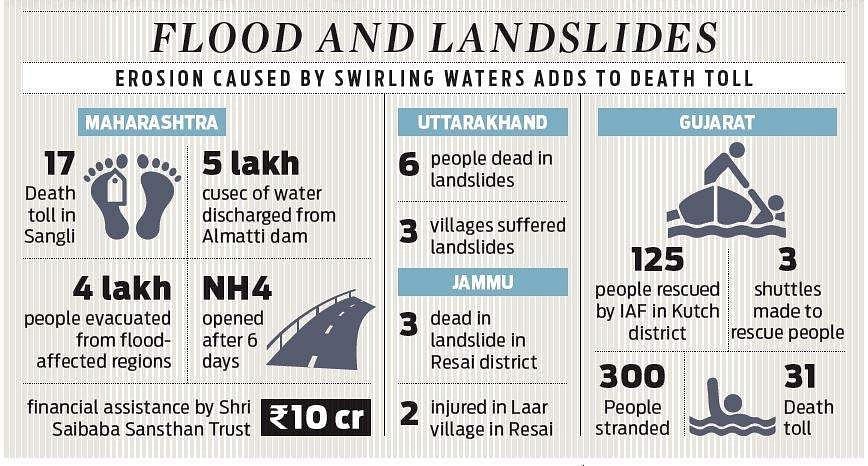 Stay up to date on all the latest Nation news with The New Indian Express App. Download now
(Get the news that matters from New Indian Express on WhatsApp. Click this link and hit 'Click to Subscribe'. Follow the instructions after that.)
TAGS
Pune-Bengaluru Highway Karnataka Floods Maharashtra Floods Flood Fury