Rumours, fears behind rise in mob violence in Bihar and Jharkhand

On Sunday, an unknown woman was thrashed at Daru Block in Hazaribagh on suspicion of being a child-lifter.

RANCHI/PATNA: Barbarism in the form of mob violence seems to have returned to the states of Bihar and Jharkhand these days. In Jharkhand, at least five cases of mob violence over suspicion of child lifting were reported from Ramgarh, Hazaribagh and Palamu districts. 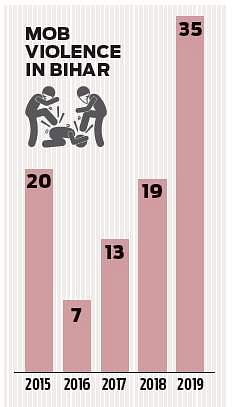 On Sunday, an unknown woman was thrashed at Daru Block in Hazaribagh on suspicion of being a child-lifter.

The woman was later saved by police and admitted to a hospital.

Similarly, in Jinga village under the same block, rumours related to the presence of child-lifters claimed the life of a youth as he fell into a well, allegedly while running away from the mob.

Earlier, a woman was beaten badly by the villagers in Silwar under Sadar block of Hazaribagh after she was found playing with the village children.

Later, it was discovered that she was mentally unstable and hailed from a different village.

In response, the police have asked all police stations in the state to conduct intensive awareness drive among people, properly conveying to them the repercussions they might have to face if found involved in such cases.

In Bihar also, state police have been finding it difficult to counter the issue.

In the last six months, as many as 35 cases of mob lynching and violence have been reported in which seven persons were killed and many more beaten up.

Alarmed by the rise in such incidents, police had launched social awareness drives across the state which aimed at educating the people to not resort to mob violence.

According to official sources, most incidents of mob violence and lynching were reported to have taken place on suspicions of child-lifting or crimes like cattle or motorcycle thefts.

Stay up to date on all the latest Nation news with The New Indian Express App. Download now
(Get the news that matters from New Indian Express on WhatsApp. Click this link and hit 'Click to Subscribe'. Follow the instructions after that.)
TAGS
Bihar Lynching Jharkhand Lynching