Why NRC is making the BJP nervous in Assam

The BJP, which has been in the forefront in support of National Register of Citizens (NRC) in Assam, is now having cold feet in accepting the possible results of the exercise.

GUWAHATI: The BJP, which has been in the forefront in support of National Register of Citizens (NRC) in Assam, is now having cold feet in accepting the possible results of the exercise. A large number of Hindus are likely to be excluded from the list, making a dent in the BJP’s core constituency.
In testimony to the rising anxiety in the BJP vis-a-vis NRC, a section of BJP leaders has been critical of the exercise in its present form. 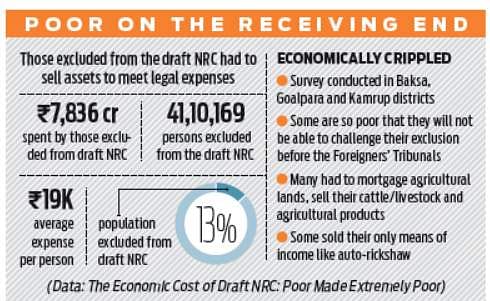 The attack is more on NRC state coordinator Prateek Hajela for his alleged autocratic style of functioning. He has allegedly not taken the state government into confidence.

To prove that Assam is not going to get an error-free NRC, the BJP first released classified district-wise figures of inclusion and exclusion in the Assembly. The figures showed a high inclusion of names in Muslim-majority districts bordering Bangladesh compared to some districts deep inside or far away from the border.

Hajela first drew criticism when the Supreme Court, which is directly monitoring the exercise, rejected the Centre’s and Assam government ‘s pleas for 20% sample re-verification of documents in the border districts and 10% re-verification elsewhere. The rejection was based on his submission in court that re-verification covering 27% of the applicants had been already done.

The statement had ruffled feathers in the BJP with Santanu Bharali, legal advisor to CM Sarbananda Sonowal, questioning the mechanism based on which the purported re-verification was done. He said the state government had no idea on the process. Subsequently, the BJP stepped up the attack on Hajela and others. BJP  MLA Shiladitya Dev said,“The All Assam Students Union is happy in the manner in which the NRC is being updated. The reason is that their problem is with the Hindus.”
To assuage fears, the BJP and RSS have now decided to extend legal help to those who are left out of NRC.

Stay up to date on all the latest Nation news with The New Indian Express App. Download now
(Get the news that matters from New Indian Express on WhatsApp. Click this link and hit 'Click to Subscribe'. Follow the instructions after that.)
TAGS
BJP NRC National Register of Citizens Assam Assam BJP