Teachers of these universities say the figures substantiate what they have been suspecting for long.

NEW DELHI: Budgetary support to central universities has increased by just 16% in last five years while the expenditure by these institutions has grown by over 42% in the same period, putting the universities under tremendous financial stress, government figures reveal.

The HRD Ministry, in response to a question in the Rajya Sabha, said while Rs 6,608 crore was allocated to central universities in 2018-19, their expenditure was Rs 8,057 crore, a shortfall of nearly 21%. In 2014-15, the gap between allocation by the Centre and expenditure was less than 1%. 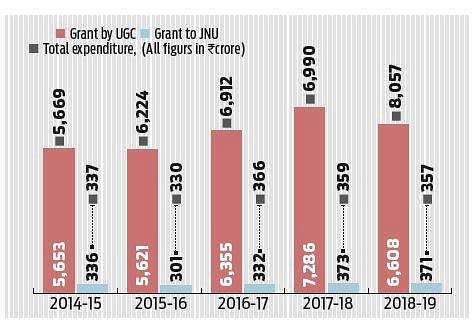 In case of Jawaharlal Nehru University — which has been a hub of protests against quality higher education becoming increasingly unaffordable — the gap between funding and expenditure has become nearly 24% now from virtually nil in 2014-15, the figures show. JNU received Rs 337 crore in 2014-15 and spent as much. In 2018-19, against central funding of Rs 371 crore, it spend Rs 457 crore.

The Parliament reply said expenditure by the universities includes internal revenue generation and unspent balances from the previous years. But given that the expenditure is higher than funds, it seems the universities are resorting to measures like cutting on fresh recruitment and opening high-paying courses to meet the gap.

Officials in the ministry and the University Grants Commission —through which funds are routed to 41 central universities — conceded that most universities are struggling to generate at least 20% of the required budget. “We are asking the universities to generate revenues either by introducing vocational courses or managing their finances better,” admitted a senior official.

Teachers of these universities say the figures substantiate what they have been suspecting for long. “There has been a calculated, conscious attempt to gradually starve government funded institutions so that they eventually collapse and can be opened for privatisation,” said Rudrashish Chakraborty of English department of K M College, DU. Sonajharia Minz of JNU said proper utilisation of funds was also lacking.

More from Nation.
Now we are on Telegram too. Follow us for updates
TAGS
central universities higher education sector HRD Ministry JNU