As many as 84 infiltration attempts were made along the Line of Control (LoC) and 59 terrorists could have entered the Kashmir Valley since August 2019, the Centre said.

NEW DELHI: As many as 84 infiltration attempts were made along the Line of Control (LoC) and 59 terrorists could have entered the Kashmir Valley since August 2019, the Centre said. 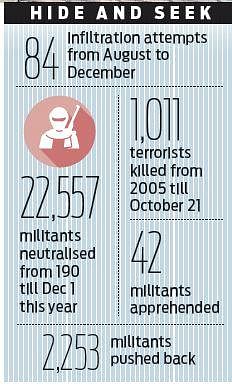 On Tuesday, MoS, Home Affairs, G Kishan Reddy told the Lok Sabha that terrorists are regularly trying to infiltrate from across the LoC. “84 such attempts have been made from across the border and it is estimated that 59 such terrorists could have infiltrated,” he said, in a written reply.

To a question that stated “if it is a fact that LoC is vulnerable that security forces are not able to keep vigil efficiently”, Reddy said, “Infiltration attempts are part of proxy war agenda of adversary to replenish the depleted terrorist strength in the Valley to achieve its intention to ratchet up violence in Jammu and Kashmir and internationalise the issue.”

Domination operations, ambushes and patrols are being conducted to thwart infiltration attempts and a robust counter-infiltration grid is in place to foil infiltration, he said.

Reddy added that the government of J&K had reported that to prevent offences involving a breach of peace, activities prejudicial to the security of State and maintenance of public order”, stone pelters, overground workers, separatists, were taken into preventive custody under statutory provisions. Such preventive detentions are being regularly reviewed by relevant statutory authorities.

Now we are on Telegram too. Follow us for updates
TAGS
Infiltration Line of Control