From Aligarh to Bengaluru and Chennai, university students erupted in anger and expressed solidarity with Jamia and Aligarh Muslim University (AMU).

From Aligarh to Bengaluru and Chennai, university students erupted in anger and expressed solidarity with Jamia and Aligarh Muslim University (AMU).

The first to join the movement against the violence were students from AMU. This led to clashes with the police late night on Sunday in which at least 60 students were injured. In Lucknow’s Nadwa College, students gathered in the hundreds shouting slogans like “Awaz do, hum ek hain” (call us we are all united) as police tried to control the situation.

The Indian Institute of Science (IISc) campus in north Bengaluru saw a group of students across departments join a protest holding placards which read, “How dare you say we are not Indians?”, “Why the hate for Muslims?”

University students took out a rally in Mhow against CAA and the Jamia incident were tear-gassed and caned even as students of Hyderabad’s Maulana Azad National Urdu University boycotted exams and held protests. Students of Bengaluru’s Jain University and Patna University in Bihar also hit the roads.

“Crackdown is a small word to be used for what happened at Jamia. This is clear hooliganism. Videos of policemen smashing bikes and beating students are all over social media,” said a BHU student.

There were also protests in Punjab against CAA and the Jamia-AMU by students of Panjab University in Chandigarh and Patiala.

JNU students joined their compatriots in Jamia outside the police headquarters at Delhi’s ITO on Sunday night to protest the alleged police assault on students.

They alleged that police cracked down on a peaceful protest by students who boycotted exams.

ALSO READ | No illegal immigrants to be given Indian citizenship automatically: Officials

Students from three IITs at Kanpur, Madras and Bombay also joined the chorus.

“They struck down the students’ retaliation at Jadavpur University. We didn’t respond... Our commitment towards the students’ community is under huge jeopardy if we don’t respond now,” read a poster. 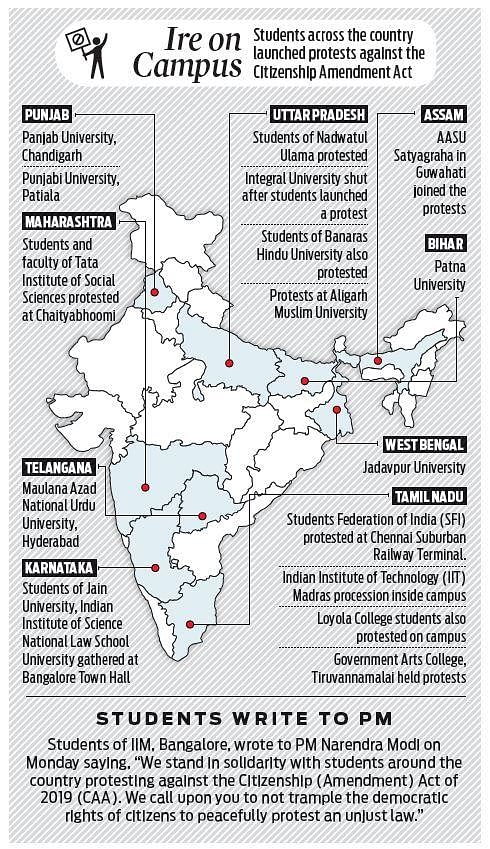 More from Nation.
Now we are on Telegram too. Follow us for updates
TAGS
Jamia Millia Islamia Citizenship Amendment Act Aligarh Muslim University