Meanwhile, in Lucknow, protesters allegedly set five media vehicles on fire and pelted stones at the police. The cops retorted by firing tear gas shells to disperse the crowd.

Protests spread to many parts of India against the recently passed Citizenship Amendment Act (CAA) on a day when mobile internet and SMS were cut in parts of the national capital. The services were restored in the afternoon.

Nineteen stations on the Delhi Metro were also closed on Thursday. The Rajiv Chowk metro station which was one of the stations to be closed has resumed operations.

Meanwhile, in Lucknow, the protest turned violent after the protesters allegedly set five media vehicles on fire and pelted stones at the police. The cops retorted by firing tear gas shells to disperse the crowd. Anti-terror squad has been deployed and almost 50 per cent of the protesters have been taken into custody.

Left leaders Sitaram Yechury, Brinda Karat and D Raja along with social activist Yogendra Yadav and student leader Umar Khalid were among the scores of protesters detained by the police in Delhi.

Family of former Congress MP and son of Shiela Dikshit Sandeep Dikshit, Delhi Congress leader Ajay Maken, his wife and two children were dragged by police and taken away to another location.

Senior lawyer and member of Swaraj Abhiyan Prashant Bhushan and Harsh Mander were also detained from ITO area. Traffic in the entire Central Delhi and the Delhi border was effected as Delhi - Gurugram border. Tehseen Poonawala was also detained by Delhi Police.

In Bengaluru, police detained historian Ramchandra Guha, who was protesting against the Act. He was later released in the afternoon. Protestors also made themselves heard in Patna, Lucknow, Chandigarh, Mumbai and Hyderabad. Chennai too was set to see fresh protests.

These are the big developments on Thursday:

With protests heating up in the national capital, the government, as a precautionary measure, asked mobile phone operators to suspend voice, data and internet services in some areas. 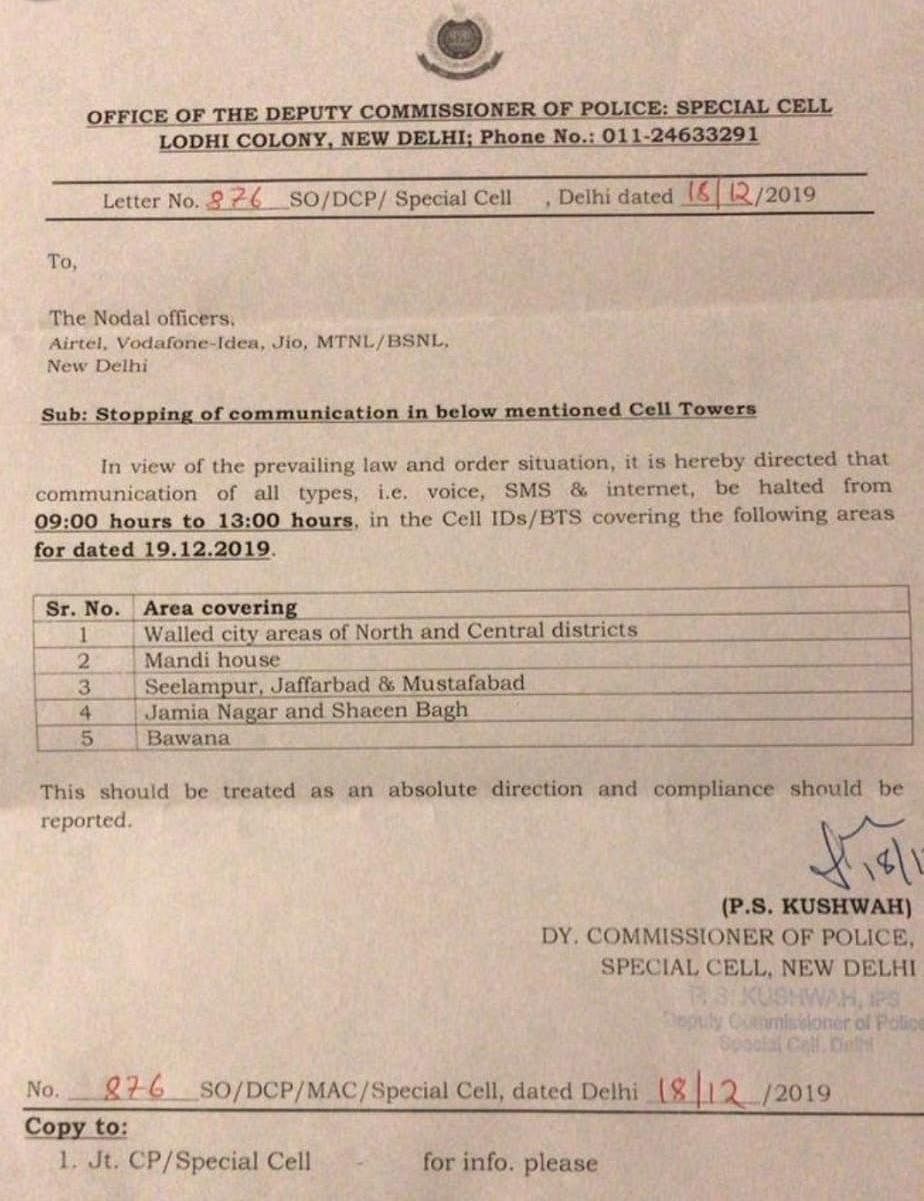 Swarajya Abhiyan chief Yogendra Yadav was among the many detained near Red Fort during the anti-CAA protest march.

I have just been detained from Lal Qila. About a thousand protesters already detained. Thousands on the way.
Am told we are being taken to Bawana.

Entry and exit gates of fourteen metro stations were closed on Thursday.

Among those detained were many students. Section 144 has been imposed in the north-east area and Red Fort area to maintain law and order hours after a request by a Swaraj Abhiyan for a peaceful march was denied by the police

Many parts of the state remained a fortress with heavy police security, but in Bengaluru CAA protestors came out to make themselves heard. Historian Ramchandra Guha was among those detained by the police for protesting at the Town Hall in Bengaluru.

The police had denied permission to the protest march and clamped down prohibitory orders under Section 144 of CrPC in the state including the city for three days.

Meanwhile, around 20-25 people have been detained for gathering at Mysore Bank in Bengaluru and staging a protest. Also, around 15 of them near Town Hall in the city were also taken away by the police.

“Police have started detaining us even when we are protesting peacefully,” said a protestor.

There were arguments with the police, who tried to seek dispersal of the crowds citing Section 144.

There was huge chaos near the Town Hall. One girl who was waiting for a friend also got pulled into the bus.

Normal life remained unaffected even though a people's forum called for a bandh in Kalaburagi today against the Citizenship (Amendment) Act in the first half of the morning.

Karnataka Chief Minister B S Yediyurappa blamed the Congress party for the protests. "The Citizenship Act will not harm any Muslim," he said and appealed the people to maintain peace.

State culture minister CT Ravi said neither the Congress nor any individual can threaten the government by saying the state will burn if the Citizenship Act is implemented. "We will not buckle to threats by Vested Interests. We will implement this Act passed by the Parliament," he stressed.

Former CM and Congress leader Siddaramiah alleged that the police were acting on the behest of the ruling dispensation. "I strongly urge them (police) to be Indians and humans first. Act sensibly and act responsibly," he said.

In Bihar, protestors against the CAA and the NRC, hundreds of supporters of left-wing parties and the Jan Adhikar Party (JAP) paralysed the rail services across the state in a dawn-to-dusk Bihar bandh called on Thursday.

They gathered outside the Assembly building in the morning ahead of the sitting of the state legislature, despite tight security arrangements and shouted slogans against the contentious legislation. A State Transport bus was set ablaze, allegedly during protest.

Following the violence, internet services have been suspended in Sambhal district until further orders.

Telangana police has detained University of Hyderabad students on their way in a bus to exhibition grounds in Nampally, to participate in a protest against the Citizenship Amendment Act and  NRC called by various left, SC, ST, BC and minorities organizations.

The Congress, the NCP and various other parties have formed a front to protest against the CAA and the National Register of Citizens (NRC) at Mumbai’s August Kranti Maidan.

Members from several NGOs and various groups staged a demonstration against the Citizenship Amendment Act (CAA) at Valluvar Kottam even as the Chennai police denied them permission.

H Raja, the Tamil Nadu BJP leader, has meanwhile posted a tweet inviting the public to a solidarity gathering in support of the CAA at the same venue on Friday. This has infuriated those opposing the Act, as they were denied permission both on Wednesday and Thursday.

Scores of people, including students demonstrated against the controversial Act near the grounds outside the Sector 20 mosque in Chandigarh. They also plan to submit a memorandum to Punjab Governor and Chandigarh Administrator VP Singh Badnore to express their resentment against the amended Citizenship Act and the NRC.