The worried government has delayed the process of framing the rules for implementing the new law and promised to consult all stakeholders for a pan-India National Register of Citizens (NRC).

NEW DELHI:  At least three persons were killed in firing on Thursday as fresh protests against the Citizenship (Amendment) Act (CAA) erupted across India with arson, rioting and sit-ins reported across a dozen states, including Karnataka, Uttar Pradesh, Delhi and Bihar.

While two persons were killed in police firing in Managluru, one person succumbed to bullet wounds in the Old Lucknow area. The UP police identified the victim as Mohammad Waqil.

He died at the Lucknow Trauma Centre, though state DGP O P Singh denied that the police had opened fire.

“The circumstances of his death is not known immediately,” Singh claimed.

In Mangaluru, two persons were killed after police opened fire to control a restive crowd.

Chief Minister B S Yediyurappa said he instructed the police to exercise restraint and told them not to allow any further episode of firing. 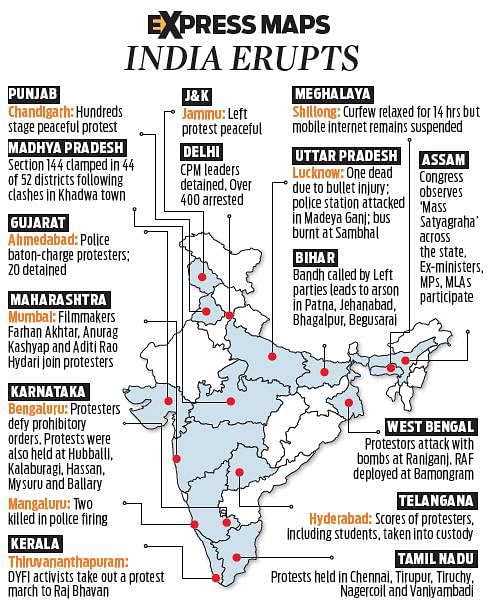 Lucknow witnessed a rash of rioting during a Samajwadi Party march that was joined by the Congress and other Opposition workers.

Protesters pelted stones and torched vehicles parked outside a police post, besides a couple of media vehicles in Lucknow.

There were reports of violence in Sambhal, Mhow, Ferozabad, Agra and Varanasi.

An angry Chief Minister Yogi Adityanath vowed to take revenge by auctioning the property of those indulging in rioting and arson to compensate for the losses.

In Delhi, thousands of protestors joined marches called by the Left and Yogendra Yadav’s Swaraj Abhiyan, but they were stopped by the police in various parts of the capital.

Bihar, too, witnessed a wave of protests led by the Left and Pappu Yadav’s Jana Adhikar Party, with the Railways and highways turning out to be the main targets.

Several buses and private vehicles were vandalised and highways obstructed with burning tyres while squatters on rail tracks held up trains.

Among the affected districts were Samastipur, Hajipur, Jehanabad, Patna and Bhagalpur.

Violence was reported in protests at Ahmedabad as well with at least five policemen getting injured in stone-pelting. Similar protests happened in Jammu and Chandigarh but were peaceful. In Assam, the Gauhati High Court directed the government to immediately restore internet and mobile services.

In Hyderabad, scores of Left leaders and students were taken into preventive custody when they tried to hold protest rallies. Protests happened in Thiruvananthapuram as well with youth taking out a march to Raj Bhavan.

Government delays framing of rules for CAA and NRC

The government has also delayed the process of framing the rules for implementing the new law and promised to consult all stakeholders for a pan-India National Register of Citizens (NRC).

Senior officials of the Ministry of Home Affairs reviewed the security situation arising out of Thursday’s protests and violence.

MHA sources said the government was treading cautiously with the rules, which they plan to frame only after peace is restored.

Union Minister of State for Home Affairs G Kishan Reddy appealed for peace while accusing the Opposition of fuelling protests.

“The rules of the CAA are yet to be issued but rumours and misinformation is being spread about CAA. Some are linking the Act to religion and mobilising people for protests. Political parties should not do politics at the cost of violence,” he urged.

Reddy also sought to allay fears on the NRC, saying the process has not been notified.

He rejected criticism that the government’s primary intention behind giving citizenship to undocumented Hindus from three neighbouring Islamic countries was to build the ground for going after Muslim migrants under the NRC.

“We have nothing on our agenda to send anyone to detention camps or deport them. Parties should not provoke people in the name of religion... The priority is to restore law and order and bust myths on the CAA. Once calm prevails, we will consult all stakeholders for NRC,” he said.

We have captured faces of arsonists on CCTV. We will avenge the damages, seize their property and auction them: Yogi Adityanath, Uttar Pradesh CM

Now we are on Telegram too. Follow us for updates
TAGS
Citizenship act Citizenship Act protests Lucknow Protests karnataka protests