One in seven persons in India suffers from mental disorder, finds ICMR survey

This was revealed by the first comprehensive study on disease burden due to mental disorders, conducted by Indian Council of Medical Research.

NEW DELHI: About one in seven persons in India suffers from mental disorders of varying severity, as per the data in 2017, with depression and anxiety disorders being the most common disorders affecting 45.7 million and 44.9 million people, respectively.

This was revealed by the first comprehensive study on disease burden due to mental disorders, conducted by Indian Council of Medical Research.

“We found that depression is highest in older adults, which has significant implications for the ageing population of India,” said Balram Bhargav, Director General, ICMR.

“The prevalence of mental disorders has doubled between 1990 and 2017. To understand the burden of mental health, we’ve studied all available data from India to bring this state-specific scientific paper on mental health,” said Lalit Dandona, Director, India State-Level Disease Burden Initiative.

Rajesh Sagar, the lead author of the study and professor of psychiatry at AIIMS, stressed the need to upgrade mental health services, create awareness, remove social stigma and generate access to treatment.

The study has been published in the latest issue of The Lancet Psychiatry journal under the India State-Level Disease Burden Initiative of ICMR and PHFI. 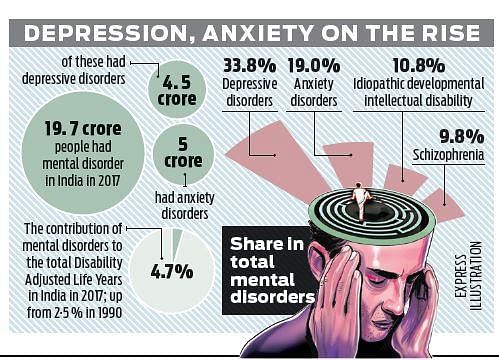 Now we are on Telegram too. Follow us for updates
TAGS
India mental disorder India mental health awareness