In the last three years, over a 100 jawans have committed suicide, and an alarming number have taken early retirement.

NEW DELHI: THE Central Reserve Police Force (CRPF) is the first line of defense in troubled regions across India. It is deployed in zones to check Counter Terrorism, Counter Insurgency, Left Wing extremism, VIP security, guarding important installations, poll duty, and even to control riots. For the jawans there is no concept of peace and the levels of stress are always high.

This takes a serious toll on the jawans and they end up contracting health issues like diabetes, hypertension, and the isolation only adds to their woes. Once a jawan is diagnosed with such issues, he is categorised under the Low Medical Category (LMC). The other aspect that adds to the numbers is personnel dealing with operational injuries and the anxiety that comes with it.

The LMC cannot be deployed in difficult terrain, high altitude zones or any situation that increases stress. In the last three years, over a 100 jawans have committed suicide, and an alarming number have taken early retirement.

In a unit having 1,200 personnel, barring the LMC, jawans on leave, temporary duties and courses, the unit has to make do with the remaining jawans. One of the biggest areas of worry is the operation in the Kashmir Valley. In just one sector of Srinagar, the number of the LMC stands at 1,883, from 26 battalions.

Another worrying aspect is that able-bodied jawans take voluntary retirement after clocking 20 years of service. A senior officer told that the LMC jawans don’t leave. This not only brings down operational efficacy but also diverts the resources of the force to look after them. Efficiency might further erode as sources quoted a recent judgment in which the High Court has ordered that the retirement age for a member of the force be equated to 60 years from the present 57.An officer posted in Srinagar said, “Age profile will have to be kept young, as challenges are diversifying. Today, it is difficult to find young commanders.”

There are units which cannot afford to have LMCs at all. These include the 10 special action COBRA units, a Parliament Duty Group, a Special Duty Group.  NSG and SPG ranks also have to be fed. 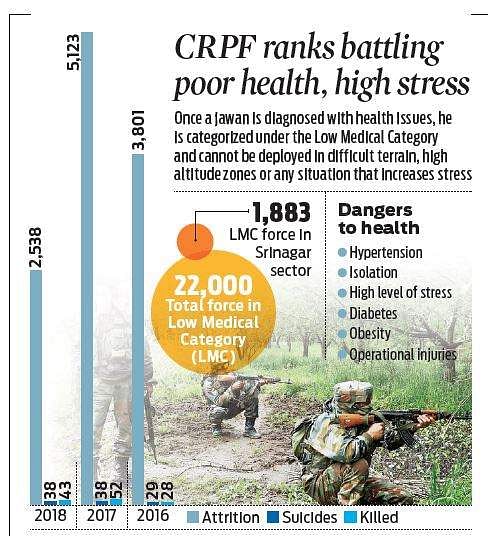 Stay up to date on all the latest Nation news with The New Indian Express App. Download now
(Get the news that matters from New Indian Express on WhatsApp. Click this link and hit 'Click to Subscribe'. Follow the instructions after that.)
TAGS
CRPF