The panchayat department has been asked to explain why the newly constructed roads have become inaccessible for motorists and why maintenance works are not being carried out.

KOLKATA: The Union Ministry of Rural Development has sought a report from the West Bengal government after a team of inspectors found that 20 per cent roads constructed less than a year ago under the Pradhan Mantri Gram Sadak Yojana were of poor quality.

The panchayat department has been asked to explain why the newly constructed roads have become inaccessible for motorists and why maintenance works are not being carried out.

The Centre’s letter seeking explanation came at a time when the issue of cut money has led to an outburst of resentment among the common people against the ruling Trinamool Congress.

The Centre’s inspection teams examined 230 roads and found that 45 of them were inaccessible for motorists while 54 roads were full of craters.

BJP state president Dilip Ghosh sought to blame the ‘commissions’ handed out to the local TMC leaders for the poor condition of roads in the state.

“Four bridges collapsed during Trinamool’s regime in the state. Road contractors are forced to pay cut money to local leaders. From where will they procure good material to construct roads?’’ asked Ghosh.

But, panchayat minister Subrata Mukherjee asserted that contractors are responsible for the maintenance of the roads for five years. “No one will be spared,’’ he added. 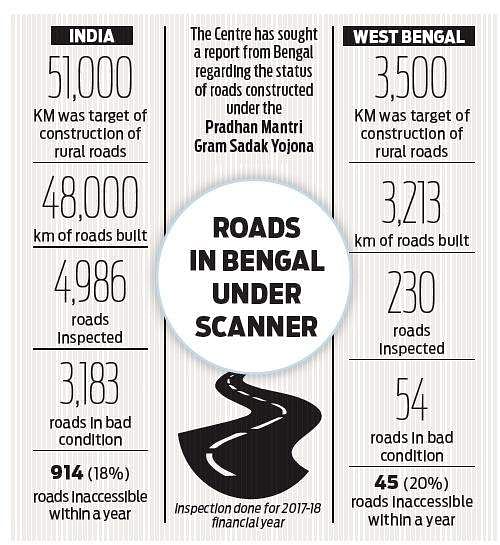