Chandrayaan-2: First step towards Indians setting foot on moon in near future

BENGALURU: It was the late 1960s and the space race between the Americans and the Russians was at its height. Amid a flurry of launches from both nations, it was America which delivered the winning blow by launching the Apollo 11 mission, which put two of its astronauts on the Moon.

Now, 50 years later, almost to the day, the Indian Space Research Organisation will launch its most ambitious lunar project yet.

On 15 July, a day before the Apollo missions launch in 1969, Chandrayaan-2 will leave Earth to begin its journey to the Moon, 3.84 lakh kilometres away.

Chandrayaan -2 is not a manned mission. It is not even the first mission that ISRO has sent to the moon, but scientists see this mission as the first step towards Indians setting foot on the moon sometime in the future.

With this goal in mind, there are a lot of similarities between the Apollo missions and Chandrayaan-2, besides the obvious differences. A former member of the Indian Space Commission pointed out, “The Chandrayaan-2 moon landing mission is similar to the Apollo series of manned missions of the US (1969-1972), which took the first humans to the moon – an orbiter that will orbit the moon; a lander that will exit the orbiter and go down to land on the lunar surface carrying the rover; and on landing, the rover getting out of the lander and moving about on the lunar surface to explore.” 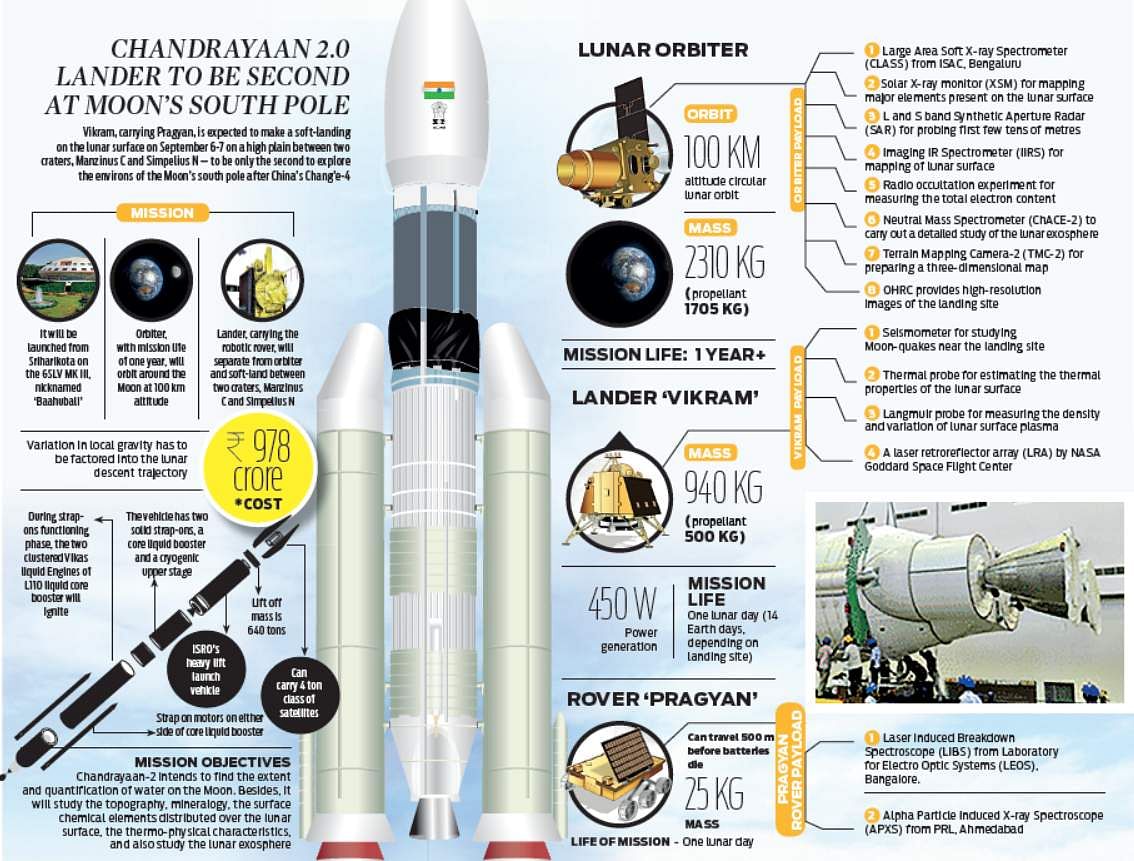 More similarities exist. The Chandrayaan-2’s lander, ‘Vikram’, is the equivalent of the Apollo-11’s ‘Eagle’ which landed at the Sea of Tranquility on July 20, 1969, carrying Neil Armstrong and Edwin “Buzz” Aldrin (recall the famous Neil Armstrong’s report “Hello, Houston...Hello Houston...The Eagle has landed!”); the robotic rover ‘Pragyan’ is the equivalent of the astronauts Armstrong and Aldrin; while the third astronaut Michael Collins remained in the orbiting command module, which in this case is the Chandrayaan-2’s orbiter that will continue to orbit the moon, carrying out its own studies while doing so – except that there is no human inside it.

There is a basic difference between the two, however. The unmanned Chandrayaan-2 will not be carrying the lander and rover back to Earth; instead, they will ‘die’ there on the lunar surface, and the orbiter, too, will crash after orbiting the moon for a year.

“And yet, technologically, this is the first step towards sending the first Indians to the moon in the future,” he said.

However, when it comes to speaking about ISRO’s ambitions to send the first Indians to the moon, the country’s premier space agency is modest.

ISRO’s chief spokesman Vivek Singh said: “Going to the moon will have to involve an orbiter, and a lander. So far, there is no other way. (But) we have to keep increasing and improving our technologies and capabilities. This mission (Chandrayaan-2) is valuable in that sense, but we are not specifically looking at a future manned mission through this.”

While India’s own first manned moon mission is still a way off, the instant significance of Chandrayaan-2 is that it will be on record only the second mission to land near the moon’s South pole, after China’s Change-4 landed close to the South pole and on the farther side of the moon on January 3, 2019.

Chandrayaan-2 intends to find the extent and quantification of water at the moon’s south pole.

ISRO Chairman K Sivan, explaining the reasons for choosing the lunar south pole for exploration, said it’s mostly due to convenience and science.

“As solar energy powers the system, a place with good visibility and area of communication was needed. Also, the place where the landing takes place should not have many boulders and craters. The slope for landing should be less than 12 degrees. The South pole has a near-flat surface, with good visibility and sunlight available from the convenience point of view,” he said.

“From the scientific point of view, the lunar South pole is under a shadow regime more than the North pole. Due to this, there is a chance of finding more water and minerals, too. The south pole is the first spot to be probed for water on the lunar surface.”