Posing as insurance agents, the police had carried out a covert operation and busted the gang whose kingpin is said to be an advocate.

BHOPAL: Fraudsters in Dhar district of Madhya Pradesh were found to have not even spared end-stage cancer and terminally ill patients, besides the elderly in a moribund state, for buying life insurance cover and getting vehicles financed in their names.

Posing as insurance agents, the police had carried out a covert operation and busted the gang whose kingpin is said to be an advocate. It was found that fake death certificates were made to establish that such ill people did not die of natural causes, but instead killed in accidents.

Moreover, the fake documents were made to establish that the deceased were middle-aged or youngsters in order to claim money from insurance companies.

Till now two cases have come to the light following which 10 gang members, including the advocate and a government doctor (who prepared fake autopsy report to establish accident as the cause of death), were arrested, the police said.

In one such case, a 70-year-old end-stage cancer patient man (who owned 10-12 acres land) died in January. Before the patient’s death, the gang colluding with the elderly man’s relatives got 8-10 vehicles, including a JCB machine, two tractors and mobiles each, financed in his name.

Later, they made a ‘death certificate’ through a different village panchayat, in which he was shown to be a 40-plus man who died in an accident. This was done to skip instalments while retaining possession of the financed vehicles.

In the other case, a life insurance policy was purchased in the name of an economically weak septuagenarian woman, who was in a moribund state. After her death, a ‘certificate’ was prepared with the help of a fake autopsy report in which she was shown as middle-aged and having died in an accident.

“The fraudsters managed to get Rs 37 lakh as a life insurance claim, out of which Rs 80,000 was given to the woman’s son for drip irrigation,” Singh said, “Till now probe suggests that they have caused loss worth Rs 2-3 crore to insurance and finance companies.” 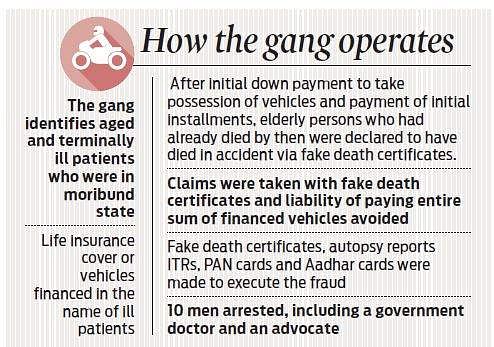