A specially designed bridge on one end of the majestic 8.8 km-long horseshoe-shaped Rohtang tunnel is also coming up.

CHANDIGARH:  To ensure safety of the motorists, scientists of Snow and Avalanche Study Establishment (SASE), a Defence Research and Development Organisation laboratory here, have designed avalanche control structures such as snow galleries and snow steel barriers. In addition, a specially designed bridge on one end of the majestic 8.8 km-long horseshoe-shaped Rohtang tunnel is also coming up. 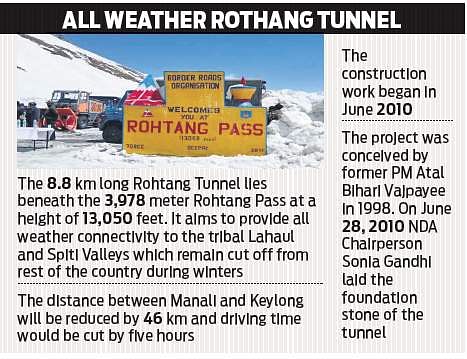 The structures were developed after studying local dynamics of avalanches like velocity and force to counter avalanches on both ends of the Rohtang tunnel, one of the world’s most challenging motorable projects at 3,000 m above sea level in Himachal Pradesh that remains under snow even during summer.

Rajesh Kumar Varma, Associate Director at SASE said, “It is the first time that SASE has designed snow galleries. Three are under construction at the tunnel’s south portal from Manali side. The length of a gallery varies from 40 m to 135 m and would be constructed at altitudes ranging between 3,053-3,080 m within one year.’’ Likewise, a concrete catch dam is under construction at the north portal of the tunnel.

Stay up to date on all the latest Nation news with The New Indian Express App. Download now
TAGS
Avalanche Snow Rohtang