In a video of the fracas, Gupta is seen snatching a paper from the hands of Birla and shredding it to pieces.

NEW DELHI:  The public hearing of Delhi Electricity Regulatory Commission (DERC) on Wednesday turned into a political battleground, with workers of the ruling Aam Aadmi Party (AAP) and Bharatiya Janata Party (BJP) coming to blows and accusing each other of unleashing bedlam on the proceedings.

Leader of Opposition in the Delhi Assembly Vijender Gupta said he filed a complaint at the Lodhi Road police station against AAP “loyalists”, as he was “prevented” from submitting his petition before the DERC. 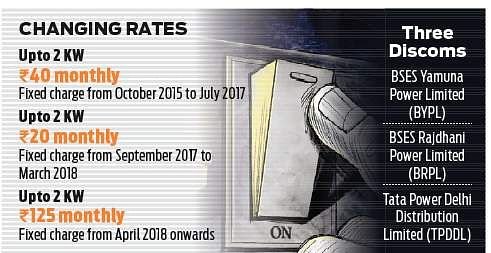 Claiming that the AAP government has increased the fixed charge on electricity bills by six times in just one year from Rs 20 to Rs 125 per connection, Gupta demanded that the government compensates consumers for the financial loss they incurred on account of payment of these charges.

AAP spokesperson Saurabh Bhardwaj, however, said, “If he (Gupta) has any piece of evidence to prove his charge against us, he should produce it. We have proof that (BJP leader) Devinder Kumar Sehrawat misbehaved with (AAP MLA) Rakhi Birla as Vijender Gupta snatched papers from her hand and tore them up.”

In a video of the fracas, Gupta is seen snatching a paper from the hands of Birla and shredding it to pieces.
Bhardwaj tweeted claiming BJP MLAs showed up late for the DERC hearing wanted to speak first.“I was prevented from submitting my petition before the DERC. (AAP MLA) Jarnail Singh even went to the extent of snatching my petition and tearing it into pieces,” Gupta said.

Stay up to date on all the latest Nation news with The New Indian Express App. Download now
TAGS
DERC AAP BJP