Campus placements of engineering graduates reached the highest in India in 2018-19 in the last seven years.

NEW DELHI:  Campus placements of engineering graduates reached the highest in India in 2018-19 in the last seven years. One  out of every two graduates is now hired by companies at the end of their programmes.The figures compiled by the All India Council for Technical Education reveal that little over 25 per cent students who took admissions and 52 per cent of those who completed their undergraduate and post-graduate programmes in 3,311 institutes of engineering, architecture and design courses  got placed in the last semester. 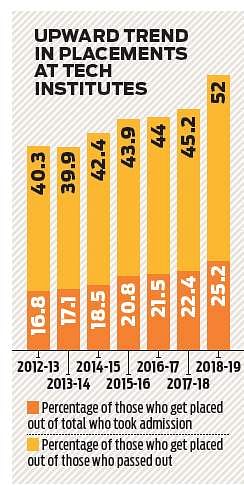 This is the steepest hike in placement percentage in a year. In  2017-18, 45.2 per cent of those who completed their degrees had got placed. Figures also show that the campus placements have been improving every year since 2012 when the AICTE started maintaining a dashboard. Officials in the technical education regulator insisted that an upward trend in the placements was a sign of improved quality of education being imparted in these institutions.

“Campus placement is getting better on the back of more hiring by companies coupled with the closure of engineering colleges, revised curriculum, better training of faculty and lower enrolments,” said AICTE vice-chairman M P Poonia.  “Also, internships have now been made mandatory in all technical courses and this has led to more skilled graduates passing out who companies are interested in hiring.”

The poor enrolment rate prompted several states to ask the AICTE to ban the creation of more seats in engineering colleges. Engineering education experts said while the steps had helped, the numbers were still disappointing. The government should encourage institutes to opt for accreditation so that students can make smarter choices.

“The best thing the government has done is that it has checked enrolment in engineering courses by shutting down some low quality institution and not giving permission to new ones but still more needs to be done,”said Dheeraj Sanghi, director of Punjab Engineering College.