NEW DELHI:  Women employees in the private sector seem to be unhappy with the working of the internal complaints committee —the internal panel meant to probe instances of sexual harassment of women by male colleagues — than those working with central and state governments.

The highest number of complainants which reached the Union Women and Child Development Ministry’s sexual harassment electronic box (She-Box) — an online management system to help distressed women at work — were from the private sector employees. The least number of complaints were received from state government women employees. 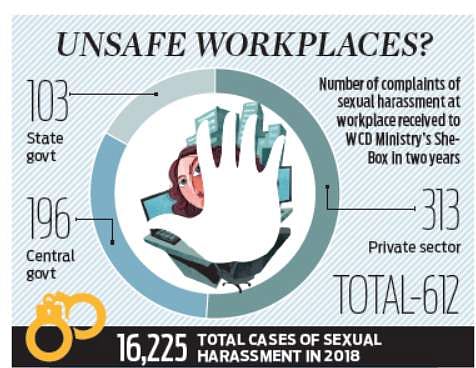 She-Box was launched in 2017 and has received 612 complaints so far, the Ministry said in response to a question in the Rajya Sabha last week.

Officials in the ministry said most women, who are not satisfied by the Internal Complaint Committees (ICCs) in the companies —as mandated under the Sexual Harassment of Women at Workplace (Prevention, Prohibition and Redressal) Act, 2013 — find it easy to report the cases to She-Box.

“Most complainants who come to us say that ICCs have either done a wish-washy job or given a clean-chit to perpetrators despite there being evidence against them. In some cases, complaints have even testified that their lives are made difficult in office after approaching the ICCs,” a senior official said. “We follow these cases with the employers and provide these women with legal and police assistance.”

This newspaper had reported a few months back that India saw almost an astronomical jump of around 4000 per cent in sexual harassment cases between 2014 and 2018. While 371 cases of sexual harassment were reported in 2014, this number rose to a 16,225 in 2018.

Now we are on Telegram too. Follow us for updates
TAGS
She-Box Sexual harassment #MeToo ICC Workplace harassment Rajya Sabha